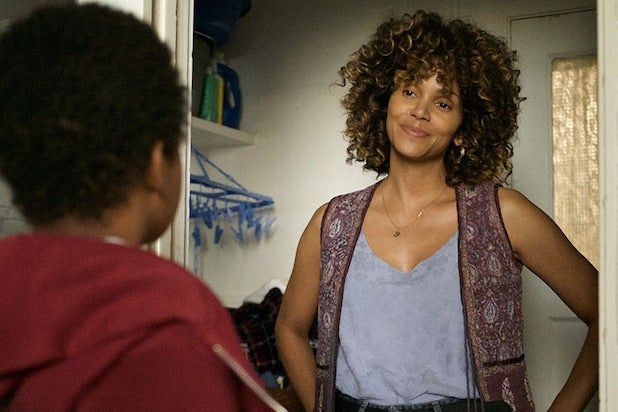 Kathryn Bigelow is no longer the only female, non-African-American director to make a new movie about a major black uprising in an inner city. Bigelow and “Detroit” have been joined by Turkish-French director Deniz Gamze Erguven, whose new film “Kings” deals with the 1992 Los Angeles riots that began when four LAPD officers were acquitted in the videotaped beating of Rodney King.

Like “Detroit,” “Kings” drops us in the middle of a conflagration caused by years of harsh treatment and growing anger — and like “Detroit,” it mixes in news footage from the time to tell the story of bystanders swept up into a maelstrom of violence.

But Erguven, whose film “Mustang” landed an Oscar nomination for Best Foreign Language Film two years ago, is not after the kind of visceral filmmaking in which Bigelow specializes. She focuses on the story of a single family: Millie, played by Halle Berry, and the large group of kids and foster kids whom she struggles to feed and clothe in her modest South Central house.

“Mustang,” which followed young Turkish sisters whose innocent play with neighborhood boys leads to their strict grandmother and uncle essentially locking them in the house until they’re ready for arranged marriages, showcased Erguven’s skill at bringing a light touch to heavy material. What rang true in “Mustang” was the relationship between the girls, a vibrant playfulness that shone through the restrictions and allowed the audience to accept and rejoice in what was essentially a fairy-tale ending.

In “Kings,” Erguven once again is at her best in sketching the bonds that tie a spirited, screeching, often joyous household together. We don’t quite know how Millie manages to wrangle this brood, but we see the love that allows her to do so — and when Ollie (Daniel Craig), a reclusive neighbor and the only white man in the ‘hood, quickly turns from a shotgun-toting crank to a kindly protector, we almost see why he does it.

It’s tricky, though, to maintain that light touch and to glory in this rambunctious household when the kids’ outings include a giddy shoplifting spree at the local market and then, when the riots hit, an even giddier foray to loot the local megastore. The older kids, meanwhile, find themselves in even darker situations, as the first night of rioting turns nightmarish on many different levels.

Still, it’s not so nightmarish that Millie and Ollie don’t find time to sneak a kiss while trying to escape from being handcuffed around a light pole, in a moment that that vies with Millie’s sex dream as the film’s least convincing.

Erguven remains skilled at portraying the joyous messiness of family ties, and an almost-de-glammed Berry is a heroine to root for. But while “Mustang” hit a sweet spot for the director, “Kings” feels like a stretch for the director, appealing at times and disappointing at others.

Although Erguven had the film in the works before she even made her last film, the subject of the L.A. riots is a tough nut to crack. That may be particularly true in this 25th anniversary year, which has already seen more than half a dozen impressive documentaries about the event.

“Kings” has a new take on the much-documented event, but it simply doesn’t feel as fresh or as essential as it should.