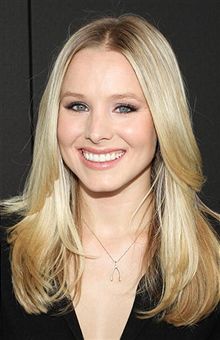 Fellow Tisch grad Kristen Bell is in talks to play me in an upcoming movie … sort of.

The "Veronica Mars" star is negotiating to play a Los Angeles reporter who thinks her looks are her greatest asset in Universal's "Everybody Loves Whales," Bell's publicist confirmed to TheWrap.

Set in Cold War-era 1988, the film stars John Krasinski as a small-town news reporter who teams up with a Greenpeace volunteer (Drew Barrymore) to enlist the help of rival superpowers to save three gray whales (one of which should be named Raymond) trapped under the ice of the Arctic Circle.

It's certainly an inspirational story, but I have to admit that aside from the passive-aggressive, borderline psychotic ex-girlfriend she played to perfection in "Forgetting Sarah Marshall," Bell does nothing for me as an actress. She has questionable taste in movie projects ("Couple's Retreat" and "When in Rome" anyone?) and worse, she keeps playing the same role over and over. Based on the limited description of her "Whales" character, it seems unlikely that monotonous streak will end.

Ken Kwapis ("The Office") is attached to direct the Working Title project, which is based on Tom Rose's nonfiction book "Freeing the Whales: How the Media Created the World's Greatest Non-Event."

Bell next stars in Disney's "You Again" (continuing the shoulder-shrugging streak) and Screen Gems' "Burlesque," as well as a segment of the omnibus film "Untitled Comedy," which sounds promising. She recently made a funny cameo in "Get Him to the Greek" (seriously, keep working with the Apatow gang) and appeared with her "Veronica Mars" co-stars on Starz's hilarious "Party Down."

She is represented by CAA.