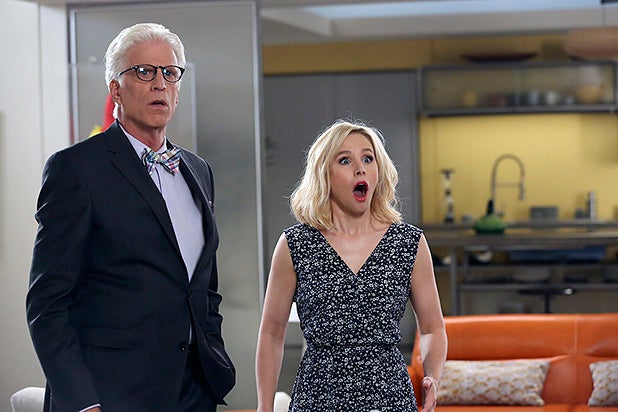 “The Good Place” returns to NBC tonight, when viewers get to see what happens to the gang after that crazy Season 1 cliffhanger. Though fans heads’ may still be reeling from last year’s big reveal, star Kristen Bell knew it was coming before she even signed a contract.

“I learned the entire plot to Season 1, including the twist, and where it would go in Season 2 during the pitch meeting I had with Mike [Schur],” she told TheWrap, affectionately recalling those three hours with the “Parks and Recreation” creator as “the longest meeting I ever had.”

(And if you want to know what happened, watch the show because we’re not about to spoil it for you here.)

Bell wasn’t alone in the know. Schur told co-star Ted Danson about the twist, too, the “Frozen” and “Veronica Mars” actress added.

Also Read: Kristen Bell Gets a Tip on How to Murder Dax Shepard From 'Dateline's' Keith Morrison (Video)

That’s pretty much where the secret-sharing stopped, however. Bell didn’t even spoil the big turn for actor husband Dax Shepherd, who told his wife he loved the freshman sitcom, though thought Danson was “underused” in Season 1, she recalled. That’s a pretty astute observation, and it was by design.

“We can’t ever even have a shot where he’s alone in the frame,” Bell explained. “I couldn’t leave the room and they stay on Ted, they have to follow me out the door, because he’d be a different person [if Eleanor, Chidi, Tahini or Jason weren’t there].”

Like this writer, Bell has wondered how long the series could go considering its setup — a concern that continued even after wrapping Season 1.

“I thought, ‘Where is this gonna go?'” Bell told TheWrap. “Is he just gonna reset us the whole time?’

Nope, he’s not. But Bell still did her homework on this one.

“I went into the writers’ room a couple times as they were building Season 2 and they were telling me what was gonna happen, then Mike pitched me Season 3,” she said. “And then he pitched me the eventual end of the show.”

Yes, the end-end. Not only does Schur already know where he’s going, Bell does too. She promised us that this whole afterlife project isn’t just for ad-sales, there’s a point to it.

“When you’re making a comment like this, when you’re talking about something that’s actually sort of important — like life and death, why we have to be nice to each other, ethical dilemmas — he’s put a lot of thought into why this show means something,” she said.

We asked Bell for more, but didn’t get much behind this cryptic tease: “You’ll see what Season 3 is gonna be — or what it’s gonna do — at the end of Season 2.”

“The Good Place” Season 2 premieres tonight at 10/9c on NBC.