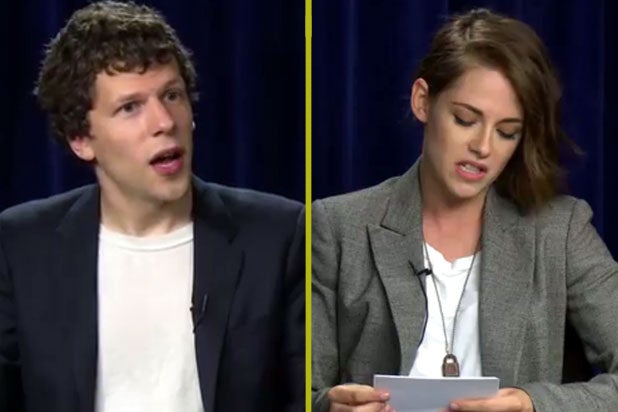 Jesse Eisenberg gets a taste of Hollywood sexism in a Funny Or Die interview with his “American Ultra” co-star Kristen Stewart.

In the “awkward interview,” Stewart asks Eisenberg the invasive personal questions about his body and love life frequently posed to actresses, while she gets softballs such as “Have you always been funny?” and “What’s your favorite sports team?”

“A lot of the questions you’re asking me feel like they’re about things that are not about the movie,” Eisenberg says after she asks him if he’s pregnant.

The video also spoofs E!’s bygone red carpet Mani Cam, which had actresses display their manicures and rings for a close-up shot. “I bite my nails. Because of anxiety,” Eisenberg says as he places his hand into the miniature red carpet diorama.

The entire set-up is revealed to be a prank, when the curtains fall and break dancers jump out around the actors. It’s at that point that Eisenberg makes a poignant realization that you’ll just have to watch to find out.