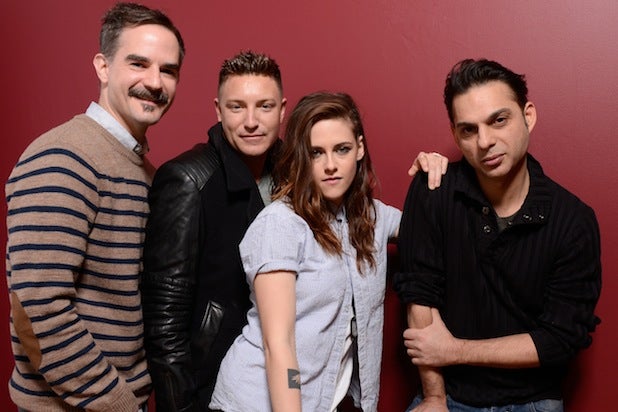 Kristen Stewart‘s return to Sundance with “Camp X-Ray” was looking like a success — at least initially — as festivalgoers began to tweet positive things about her starring turn in the Guantanamo Bay drama that premiered midday Friday to a partial standing ovation at the cavernous Eccles Theater in Park City.

The film, written by first-time feature director Peter Sattler (above, left), follows Amy (Stewart), a solider who’s assigned to prison guard duty at Guantanamo Bay, where she befriends an inmate (played by “A Separation” star Payman Maadi, above right). Sattler has said that Stewart had a lot of input on the character and script, which was shot at a juvenile prison outside of Los Angeles.

The Q&A that followed focused as much on the film’s music and the preparation and performance by Maadi, who many in attendance believed outshined his better-known co-star. And Stewart did little in “Camp X-Ray” to dispel the main knock on her acting — that she essentially wears the same pouty expression in every situation — though considering that she plays an emotionally conflicted military grunt in this one, it seemed to work.

Caught between her compassion for the inmates and her duty to guard and stay guarded, Stewart is inscrutable; a cipher with pulled-back hair.

“We don’t know anything about her,” she said. “Hopefully its transmitted somehow without details. We talked all the time about this girl.”

“Camp X-Ray” is in U.S. competition in Park City, where Stewart flew in from Los Angeles on Thursday to attend the premiere. But K-Stew is no Sundance newbie: She came to Park City in 2010 for the premiere of “The Runaways,” in which she played rocker Joan Jett, and has attended other years without a film in competition.

Stewart’s post “Twilight” career has been mixed; her performance as the moody Marylou in Walter Salles’ “On the Road” was generally well-received, but her blockbuster followup “Snow White in the Huntsman” was less so: TheWrap critic Alonso Duralde wrote that “Even swaddled in armor and chain mail, it’s hard to imagine this blank-faced debutante stirring an army to follow her to Forever 21, much less to battle against a powerful necromancer.”

Reactions were mixed among the Twitterati streaming out of the Eccles on Friday afternoon:

Kristen Stewart and actor from A Separation are superb in Camp X-Ray. Direction has some pacing issues. Nice 3rd act. #sundance

Camp X-ray may be a tad over-clinical in its examination of Gitmo malaise, but Kristen Stewart adds unexpected warmth to it. #Sundance2014

Kristen Stewart just got upstaged at Sundance by her own co-star. She’s good in camp x ray but Maadi is better