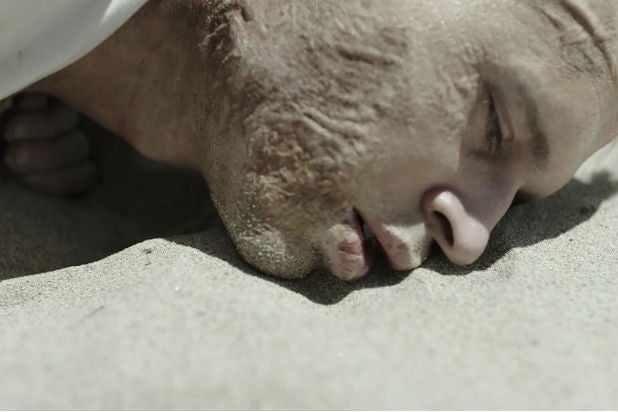 Actress Kristen Stewart screened her directorial debut Thursday night at the Sundance Film Festival — a visceral short called “Come Swim” that held its water, but one easily upstaged by other entries from opening night.

Stewart served as both writer and director for the project, a look at a day in the life of a struggling young man (Josh Kaye).

With what he’s struggling is entirely unclear — a woman’s voice narrates most of the film, and longing glances at photographs on his wall lead us to believe she’s his long lost love.

There are also hints he might be tangling with addiction, as he lives in squalor, appears sickly and drinks gallons and gallons of bottled water, crunching and tossing the plastic containers like bones when he’s had his fill.

The imagery is strong, Stewart obviously worked well with DP John Guleserian and visual effects house Framestore for the abstract piece, part of Refinery29‘s Shatterbox Anthology — but the movie is literally drenched. There is no subtlety in the constant rushing of oceans waves, rainstorms, baths and sinks and showers and those aforementioned bottles of water littering every shot.

In fairness to the former “Twilight Saga” lead, seven total shorts were screened along with hers — and the three that proceeded “Come Swim” were particularly strong.

Andrew Fitzgerald’s “I Know You From Somewhere” was a cautionary tale about digital narcissism, showing us how a misconstrued argument can catch social media fire and ruin someone’s life and career.

It follows two young parents in the year 2067, who are told their newborn son has a rare disease and under a month to live. Physicians introduce an experimental system that would link into baby Toru’s consciousness and allow him to live a fully simulated life from birth to adulthood in the span of a week — all in his own reality.

The simulation, however, is not without its complications and his parents can’t participate — only watch him locked away in a futuristic incubator.

It’s a heartbreaking and seemingly-simple story of a New Orleans woman in love with a man in prison. As she contemplates what a jailhouse wedding would look like, as opposed to the dream nuptials every girl fantasizes about, her family rails against her life choices. She herself does not want to resign to a relationship divided by plate glass.

“Alone,” for all its brevity, represents the story of countless “incarcerated families” in America. It will run as a New York Times Op-Doc in February. The short is part of a series supported by the John D. and Catherine T. MacArthur Foundation Short Documentary Fund at Sundance Institute

Stewart returns to the front of the camera in a forthcoming Lizzie Borden biopic, “Lizzie.”