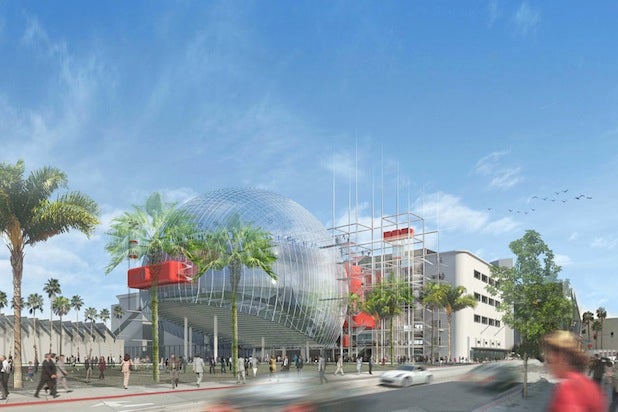 The Los Angeles City Council has approved plans for the Academy Museum of Motion Pictures, which could begin construction later this year at the former May Company building on the corner of Wilshire Blvd. and Fairfax Ave. in the Miracle Mile district of Los Angeles.

The vote was unanimous, 13-0, and completely expected. The Academy has always had city backing on this project and others, with current mayor Eric Garcetti, a longtime ally of the organization dating back to his days as a city councilman representing the Hollywood area.

Neighborhood complaints about possible increased noise and traffic were not enough to halt the approval process. But the nonprofit organization Fix the City, which has successfully sued to stop other high-profile projects, has threatened legal action to halt this one as well.

In a statement following the vote, Garcetti said, “I am thrilled that Los Angeles is gaining another architectural and cultural icon. My office of economic development has worked directly with the museum’s development team to ensure that the Academy Museum of Motion Pictures will create jobs, support tourism, and pay homage to the industry that helped define our identity as the creative capital of the world.”

Support for the project was spearheaded on the city council by Tom LaBonge, who is in the final days on the council after 14 years representing a district that includes the site of the museum.

Plans for the Renzo Piano-designed museum are well underway, with late 2015 always earmarked as a start date for construction, and a projected opening date in 2017.

The museum sits on property that was once a landmark department store. It was later purchased by the Los Angeles County Museum of Art, which used it both for office space and for temporary exhibits.

In 2011, the Academy made a deal with LACMA to take over and renovate the building for its $300 million museum project, which was originally planned to be built from scratch in Hollywood until fundraising for that venture dried up.

The current capital campaign has raised more than $250 million in pledges, according to the Academy.