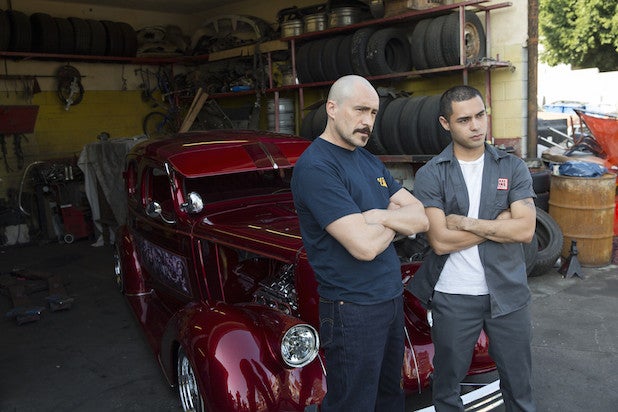 It may be a measure of the lowered expectations surrounding this year’s Los Angeles Film Festival that the dominant mood after its opening night film “Lowriders” was mild surprise that it wasn’t bad.

The family drama about East L.A.’s car culture was an appropriate kickoff for a festival whose programming strategy now emphasizes diversity and makes few nods toward the mainstream or toward the Hollywood films that once popped up among all the indies.

Under the leadership of producer Stephanie Allain, LAFF now places a premium on work from female and minority filmmakers — and while that approach is true to the mission statement of Film Independent, the non-profit organization that produces the festival, it also means that this year’s lineup is made up almost exclusively of low-profile indies with no real buzz in Hollywood.

The festival set off down this road in earnest last year, after several years in which higher-profile films like “The Kids Are All Right,” “Bernie,” “Snowpiercer” and even “The Twilight Saga: Eclipse” were booked alongside the indies. The result is a lineup long on diversity but short on heat — hence the low expectations going into Wednesday night’s opening at the Cinerama Dome in Hollywood, and an apparent lack of enthusiasm about this year’s festival from Hollywood professionals.

“I think Stephanie should have mixed it up more, but you have to give her credit for sticking to her guns,” said one executive before the “Lowriders” screening. “But if you’re showing these movies that nobody in the industry is going to see, are you really doing the filmmakers a favor?”

“Lowriders,” though, was a pleasant surprise that suggested Allain and her programmers could well have found some gems as they assembled a lineup with the eye on diversity. Executive produced by Jason Blum and Brian Grazer, the film from Peruvian director Ricardo de Montreuil is focused on an East L.A. teenage graffiti artist, his father who owns an auto garage and an older brother fresh out of prison.

The story gets predictable, and clunky voiceover narration doesn’t add anything essential, but the film offers a fascinating glimpse into the world of souped-up cars, and it’s distinguished by a terrific cast that includes Gabriel Chavarria as the teen, Demian Bichir as his father, Theo Rossi as his brother and Eva Longoria and Melissa Benoist in smaller roles.

“It’s so Los Angeles, it’s so diverse, it’s so rich,” said Allain when she introduced the screening — and two hours later, at a post-screening party a couple of blocks from the Arclight Hollywood, she was accepting congratulations for the way the festival kicked off.

Eight more days remain, with screenings taking place mostly at the Arclight in Culver City. Perhaps expectations won’t be so suppressed as the festival progresses.