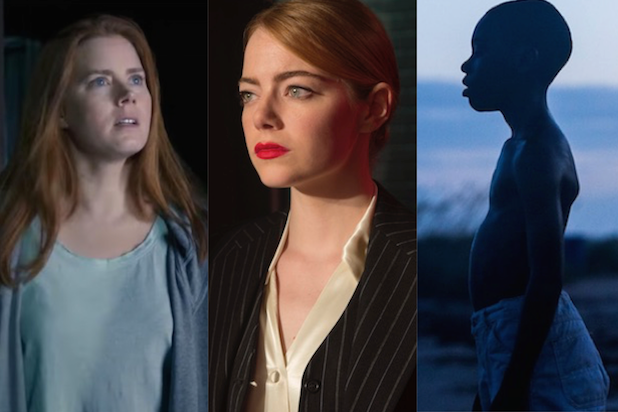 “La La Land” led all films in nominations for the 22nd Annual Critics’ Choice Awards, which were announced on Thursday morning by the Broadcast Film Critics Association.

Damien Chazelle’s musical picked up 12 nominations from the organization of TV, radio and internet critics, with Denis Villeneuve’s “Arrival” and Barry Jenkins’ “Moonlight” landing 10 nominations each.

“Manchester by the Sea” scored eight Critics’ Choice Awards nominations, while “Hacksaw Ridge” got seven and “Doctor Strange,” “Fences,” “Hell or High Water,” “Jackie” and “Lion” each had six.

In the Best Picture category, “La La Land,” “Arrival,” “Moonlight,” “Manchester by the Sea,” “Hacksaw Ridge,” “Hell or High Water” and “Lion” were joined by “Fences,” “Loving” and “Sully.”

The BFCA moved the Critics’ Choice Awards voting much earlier this year, making it impossible for the 250-plus members to see films like Martin Scorsese’s “Silence” and Gareth Edwards’ “Rogue One: A Star Wars Story.” The move was an apparent attempt to increase interest in the awards, which will take place on December 11, and to position them as more of an influencer on later voters, specifically for the Oscars.

But the slate of nominees was a very mainstream one, with relatively few daring choices that might not already be on Oscar voters’ radar. Mel Gibson’s “Hacksaw Ridge” and David Mackenzie’s “Hell or High Water” might have done better than expected, and the Critics’ Choice picks suggested that “Arrival” may be creeping into the top echelon of contenders alongside “La La Land,” “Moonlight,” “Manchester by the Sea” and “Fences,” but otherwise there’s little in the nominations to change the temperature of any contenders or upset any races.

The only “snubs” in the Best Picture category don’t really qualify as snubs: “Hidden Figures” missed a Best Picture nomination and a nod for Taraji P. Henson in the brutally competitive Best Actress race, but it did land three nominations – Best Supporting Actress for Janelle Monae, Best Acting Ensemble and Best Adapted Screenplay.

And while “Jackie” couldn’t crack the best-pic category either, it was recognized in six other categories, including Best Actress for Natalie Portman.

Mild surprises in the acting categories include the fact that none of the powerhouse supporting actor contenders from “Fences” made the cut, though it’s entirely possible that Mykelti Williamson, Stephen McKinley Henderson, Jovan Adepo and Russell Hornsby split the vote. And while Meryl Streep and Hugh Grant were passed over for “Florence Foster Jenkins” in the main acting categories, they got nods in the separate comedy-acting categories.

In a way, the lack of significant omissions was also due to the fact that the Critics’ Choice Awards pick six nominees in each of the main categories, giving them an artificially inflated rate of agreement with the Oscars.

The Critics’ Choice Awards announces nominees in 27 different categories, of which 18 are also categories on the Oscars. The rest are devoted to comedies, action and sci-fi films, young actors and ensemble performances.

If you restrict nominations to the 18 categories that correspond to Oscar categories, “La La Land” retains all 12 of its nominations, while “Arrival” claims sole possession of second place with nine nominations and “Moonlight” slips to third place with eight. “Manchester by the Sea” and “Jackie” follow with six each.

The Broadcast Film Critics Association is made up of more than 300 television, radio and online critics. (Full disclosure: I am a voting member.) It is a partner organization to the Broadcast Television Journalists Association, which announced its Critics’ Choice Awards television nominations on November 14.

The Critics’ Choice Awards will take place on Sunday, December 11 at Barker Hangar in Santa Monica. It will be hosted by “Silicon Valley” star T.J. Miller and will be broadcast live on A&E at 8 p.m. ET / 5 p.m. PT.