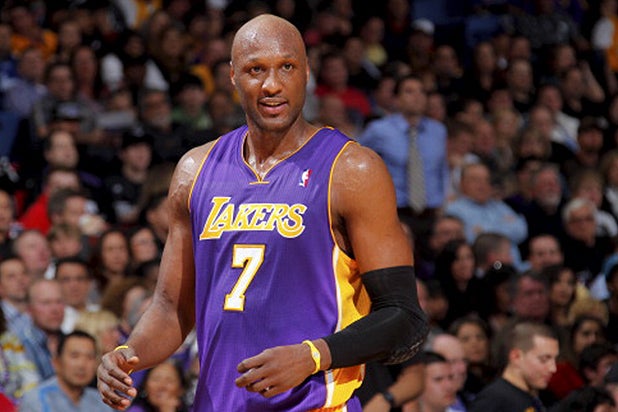 The NBA community was rocked Tuesday by the devastating news that Lamar Odom had been rushed to the hospital after being found unconscious at a Nevada brothel.

While the Los Angeles Lakers didn’t have an official statement, the team was “continuing to monitor the situation and certainly are hoping for the best,” a spokesperson told TheWrap.

NBA stars including Dwyane Wade from Odom’s former team the Miami Heat, longtime rival on the court Paul Pierce, and childhood friend Metta World Peace all expressed their sympathy and support to the longtime player.

“Please God anything u can do to help him thru this,” asked Pierce, who played against Odom on the Boston Celtics.

“Prayers all the way up for my brother Lamar Odom,” Wade tweeted.

While Odom was being treated in a nearby hospital, ironically Kobe Bryant and the rest of the Lakers were also in Las Vegas Tuesday night playing at the MGM Grand Garden Arena.

Metta World Peace (a.k.a. Ron Artest), who played with Odom as a teenager in New York on the same Amateur Athletic Union team, told reporters after the exhibition game against the Sacramento Kings: “There’s not one word I could say that would make sense.”

Clippers Point Guard Chris Paul released a statement during a press conference in Shanghai saying: “I wanted to extend love and support to one of our NBA brothers, Lamar Odom. We love you, man. Keep fighting.

“He’s a member of this fraternity, our basketball brotherhood, and we love you and we’re all there for you, man,” Paul added.

Odom, 35, was found unconscious in his room at the Love Ranch South in Pahrump, the owner of the brothel told TheWrap.

He was transported by ambulance to a hospital in Pahrump, Nevada, and later taken to a medical facility in nearby Las Vegas. Attempts to airlift the 6’10” forward failed because of his height, according to a statement from the Nye County Sheriff’s Office on their Facebook page, so instead he was immediately transported by Pahrump Valley Fire and Rescue Ambulance to Sunrise Hospital for further treatment.”

Odom, a U.S. Olympian who rose to reality TV fame after marrying Khloe Kardashian, arrived at the brothel on Saturday and had been partying with the women there for days before he was found, TMZ reported.

Khloe, sister Kim and mom Kris Jenner reportedly flew out to Vegas to be by Odom’s side, while younger sister Kendall Jenner tweeted “please don’t go” on Wednesday to her former brother-in-law.

The first round draft pick joined the NBA in 1999 and went on to play for the Lakers from 2004 to 2011. He last played in the league in 2013, shortly afterwards he was arrested for DUI and later that year Kardashian filed for divorce.

PRAYERS all the way UP for my brother Lamar Odom!!!

Prayers go out to Lamar Odom and his family please God anything u can do to help him thru this????

Our thoughts and prayers are with Lamar Odom and his family at this time.

A very concerned Metta World Peace couldn't talk about childhood friend Lamar Odom: "There's not one word I could say that would make sense"

Thoughts and prayers with Lamar Odom – everyone on the team plane thinking, praying and pulling for well being

Get well @RealLamarOdom guy with a great heart

Warriors interim coach & ex-Laker Luke Walton calls Lamar Odom "a brother to me" & "my prayers are with him. It's tough thinking about it."

Nick Young on Lamar Odom: "It's sad . My thoughts and prayers go out to him."