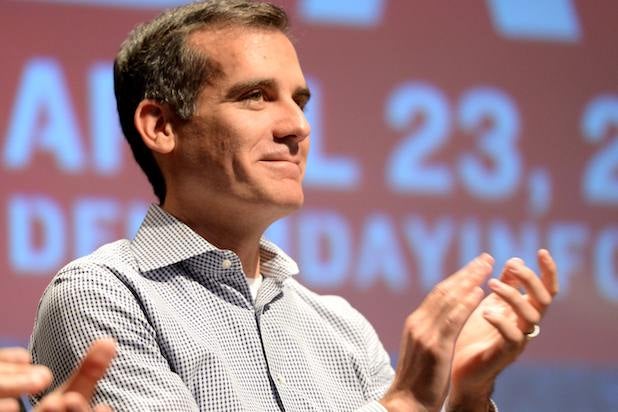 The NBA may be pressuring Los Angeles Clippers owner Donald Sterling to relinquish control of the team and sell it, but L.A. mayor Eric Garcetti doesn’t expect the 80-year-old to give it up without a fight.

“Well, I think that he thinks that he’s going to be the owner for a long time, that he wants to stay the owner,” Garcetti said Sunday on CBS’ “Face the Nation”. “To fight this for a long time only means the value of the team goes down. But more importantly, the debate rages on forever and I think we need to put an end to it.”

NBA commissioner Adam Silver banned Sterling from the league life last Tuesday, and announced a $2.5 million fine for the racist rant captured on leaked audio recordings. Silver also recommended to the Board of Governors that Sterling be forced to sell the team.

Sterling, himself, still has not spoken extensively about the issue, but his wife and Clippers co-owner, Shelly Sterling, agrees with the NBA’s decision to implant a new CEO to head the Clippers to ensure “stability of the team during this difficult situation.”

“I spoke with Commissioner Adam Silver this week to tell him that I fully supported his recent swift and decisive action,” she said in a statement released over the weekend. “We also agreed at that time that, as a next step, both the league and the team should work together to find some fresh, accomplished executive leadership for the Clippers. I welcome his active involvement in the search for a person of the utmost character, proven excellence and a commitment to promoting equality and inclusiveness.”

The NBA said Saturday that the search for such an individual “is underway.”

Meanwhile, Oprah Winfrey has teamed up with David Geffen and Larry Ellison to bid on the Clippers “should the team become available.” Dodgers co-owner Magic Johnson has also expressed interest in the team, worth a reported $575 million.

Two-thirds of owners — or 22 of 29 teams, excluding the Clippers — need to vote in favor of ousting Sterling in order for the team to go up for sale. 16 NBA ownership groups have already stated they will not support Sterling.