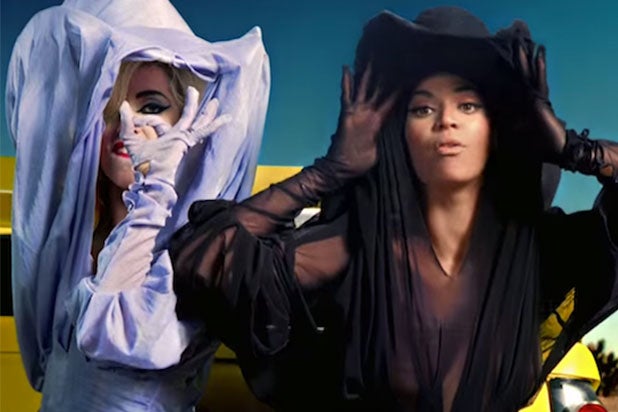 Lady Gaga‘s latest Instagram has the Beyhive buzzing that Beyonce might join the “Perfect Illusion” singer during the Super Bowl halftime show on Sunday.

“Houston, you are beautiful,” Gaga wrote in a Wednesday Instagram post under a picture of her sitting on a patio.

But it’s the choice of emoji that is really setting Beyonce fans off — the performer used a bee emoji, one often associated with Beyonce and one fans use to show their support for the “Formation” superstar.

Fans were quick to speculate that this would mean that Beyonce, who on Wednesday announced she is pregnant with twins, might join Lady Gaga during her performance on Sunday.

“So @Beyonce is performing with @ladygaga at #halftime?? Can’t wait to see what #Gaga has in store! #trueorfalse #SB51#Houston,” wrote one user.

If you recall, Lady Gaga and Beyonce released a song together in 2009 titled “Telephone.” In 2010, they performed their hit on “The Late Show.”

In September, it was announced Gaga would headline the halftime show at Super Bowl LI. This won’t be Gaga’s first time at the Big Game; she performed the national anthem at last year’s NFL championship game.

Last month, reports claimed that the NFL told Lady Gaga she couldn’t speak about politics or Donald Trump during her halftime performance. However, the NFL called it “unsourced nonsense.”

The show — and — will take place on Sunday at NRG Stadium in Houston. Fox will air the Big Game this time around.

Reps for Lady Gaga or Beyonce have not yet responded to TheWrap’s request for comment.

man, can you imagine if @ladygaga brings @Beyonce on stage to perform on Sunday…

So @Beyonce is performing with @ladygaga at #halftime?? Can't wait to see what #Gaga has in store! #trueorfalse #SB51 #Houston

Beyoncé might be on stage wit lady Gaga…for the super bowl, uh oh…*waits for tl to go crazy*

Maybe @Beyonce will arrive at @LadyGaga's #SuperBowl halftime show in the Pussy Wagon and we'll finally get a Telephone sequel.

@BenderandMolly @MollyMesnick that would also explain why @Beyonce announced her pregnancy, because everyone will see it at the #SuperBowl!

I'm just putting this out there in the universe. Can #LadyGaga bring up special guest #Beyonce during Houston #Superbowl (Bey's hometown)? pic.twitter.com/vX9TqZEEdq