Adam Lambert, the "American Idol" runner up who captured America’s attention with his liberal use of eyeliner and loud outfits, has done it again.

The cover of his debut album "For Your Entertainment," has generated controversy with its apparently provocative image of the heavily made up singer gazing languidly at the camera while a bright star scape flickers in the backdrop. 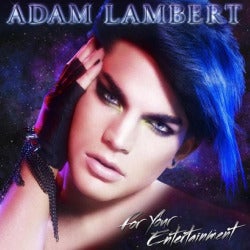 It’s not immediately clear why the over-the-top cover art was so surprising, as it comes from a performer who is famous for his embrace camp (the most shocking thing is the singer’s eerie resemblance to the pop star Pink).

But here’s a flavor of the criticism it prompted. Mark Lorenz over at Monolith.com writes: "…if the album cover is any indication, the album comes with a unicorn you can ride on and glitter you can sprinkle from the roof-tops. Also, it looks like they were going for a David Bowie had sex with a photoshop retoucher vibe, who then had sex with the cover of a Poison album."

Jillian Madison of Pophangover.com was even more brutal in her assessment of Lambert’s look, asking "Is Adam Lambert’s CD cover art the ugliest of all time? In a word: YES."

Lambert did find one important source of support from an unlikely new media ally. Perez Hilton, the blogger well known for his snide jabs at celebrities, said he thought Lambert looked "particularly enchanting."

Lambert beat back at the insults by taking to the popular micro-blogging site, Twitter.

"Thank you to those who appreciate and understand that the album cover is deliberately campy. It’s an omage [sic] to the past. It IS ridiculous," Lambert tweeted this morning. "For those that don’t get it: oh well… Glad to have gotten your attention."

The embattled singer signed off with a defiant, "androgyny. Rock n Roll."

Lambert later returned to Twitter to apologize for misspelling homage.

"For Your Entertainment" hits stores next month.