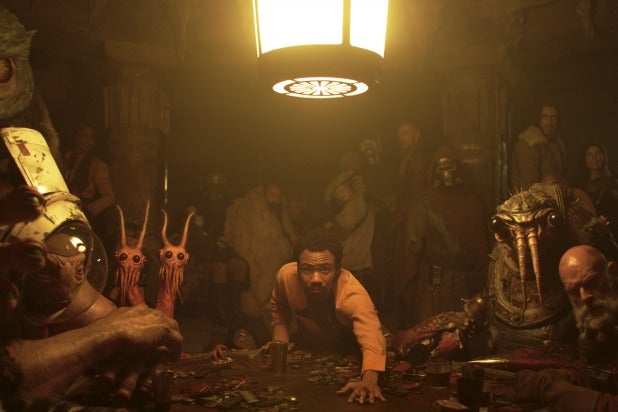 Lando Calrissian will return in “Lando,” a brand-new event series for Disney Plus. “Dear White People” filmmaker Justin Simien is in the early stages of developing the project.

The project was announced by Lucasfilm President Kathleen Kennedy at Disney’s Investor day. It is currently unknown if either Billy Dee Williams or Donald Glover, who recently played the galactic scoundrel in 2018’s “Solo: A Star Wars Story,” will return.

Also unknown is whether the series will be live action or animated. It’s notable that “Lando” was announced alongside several other “Star Wars” Disney+ projects, including two spinoffs of “The Mandalorian”: One that will focus on Ahsoka Tano (Rosario Dawson) and the other called “Rangers of New Republic.”

The plot and characters of “Rangers” weren’t revealed during the presentation, though widespread speculation is that it will feature Cara Dune, the former Rebel Alliance special forces soldier-turned local sheriff played by Gina Carano on “The Mandalorian.” If, that is, her recent comments about the election and COVID-19 don’t get in the way.

In “Star Wars” lore, Ahsoka Tano is the former Jedi apprentice of Anakin Skywalker, aka Darth Vader. She was introduced on “The Clone Wars” and later played a major role on “Star Wars: Rebels,” and recently made her live-action debut during the second season of “The Mandalorian.”

“Ahsoka” is expected to star Rosario Dawson and will debut on Christmas Day 2021.