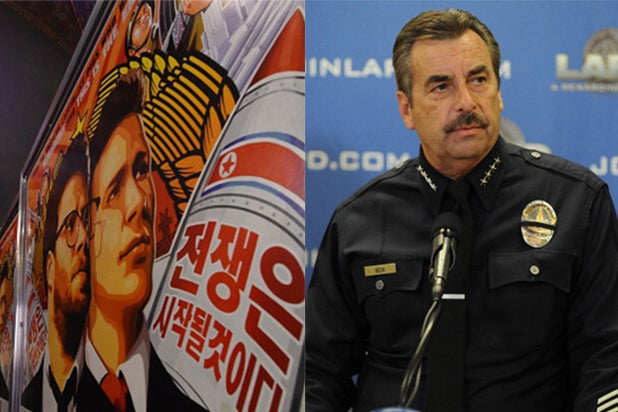 The group claiming to be behind the cyberattack on Sony Pictures Entertainment issued a rambling threat Tuesday against theaters planning to show the upcoming film “The Interview,” and said people considering going to the movie should “remember the 11th of September 2001.”

In response, Los Angeles Police Department Chief Charlie Beck said “extra precautions” will be taken at theaters over the holidays.

The threat, written in broken English, was posted on file-sharing services that have been used to circulate internal Sony emails stolen in the cyberattack. “We will clearly show it to you at the very time and places ‘The Interview’ be shown, including the premiere, how bitter fate those who seek fun in terror should be doomed to,” the posting by the Guardians of Peace reads. “Soon all the world will see what an awful movie Sony Pictures Entertainment has made. The world will be full of fear. Remember the 11th of September 2001.”

The threat goes on to warn potential moviegoers to “keep yourself distant from the places at that time. If your house  is nearby, you’d better leave.”

Some speculation about the motive behind the cyberattack has focused on the Seth Rogen-James Franco film, in which they portray a television interviewer and producer recruited by the CIA to assassinate North Korean leader Kim Jong-un.

North Korea has denied any involvement.

The film had a low-key premiere in downtown Los Angeles last week, with no interviews being granted with the stars. The film’s New York premiere is scheduled for Thursday, and that event is also expected to be a scaled-down affair. The film is scheduled to open on Christmas Day.

Beck said the LAPD would be on alert when the film opens.

“We take those threats very seriously and we will take extra precautions during the holidays and at theaters,” Beck said. “We’re very aware of the controversy surrounding Sony studios so we’ll take that into account. I won’t get into the details of all of that, but suffice it to say
we’re aware of it and we’ll take appropriate action.”