Former CBS News correspondent and Fox Nation host Lara Logan has shared more conspiracy theories about the true plan and meaning behind immigration, according to people of faith — not to mention the followers of Q-Anon.

In an interview with Newsmax’s Eric Bolling for “The Balance” segment Wednesday night, Logan revealed that she spoke to a man with documents in his hand who said that he had infiltrated “the global cabal” at the United Nations. The paperwork she referenced detailed a plan to disrupt American pride by allowing illegal immigrants into America.

“This was several years ago, the plan was to infiltrate 100 million illegal immigrants, and at that point, they were already at 40 million and these people would dilute what they call the pool of patriots. Those were their words, right?” Logan said to Bolling. “And they would not be taught that America is a great country, and trained to sing the national anthem with pride and so on and so on. They will be told all the negative things that we’re taught about the US today, that our own children are taught.”

Logan summed up this infiltration as having a consequential effect on American patriotism and pride.

“What would be the effect of diluting the pool of patriots? Well, it would be to break down the sense of pride in being American and what it means to be American,” she continued.

When Bolling asked Logan if God is OK with a closed border after she went on a tangent of having faith in spirituality and God’s protection, she provided her perspective. 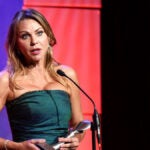 “It’s much bigger than that. God believes that, in sovereignty and national identity, the sanctity of family and all the things that we’ve lived with from the beginning of time, and he knows that the open border is Satan’s way of taking control of the world through all of these people who are his students and his and his servants,” she said. “And they may think that they’re going to become gods, that’s what they tell us. Yuval Noah Harari and all the rest of them at the World Economic Forum. You know the ones who want us eating insects, cockroaches and that while they dine on the blood of children, those are the people right, they’re not going to win. They’re not going to win.”

In November 2021, during her tenure as a host of “Lara Logan Has No Agenda,” Logan drew a comparison between Dr. Anthony Fauci and Nazi doctor Josef Mengele, right around the time the Omicron variant of the coronavirus started spreading.

“This is what people say to me: he doesn’t represent science, he represents Dr. Josef Mengele, the Nazi doctor who did experiments on Jews during the Second World War and in the concentration camps,” Logan said.

Fox News ousted Logan following the episode in which she made the comparison, and her response according to The Hill was, “They don’t want independent thinkers. They don’t want people who follow the facts regardless of the politics.” 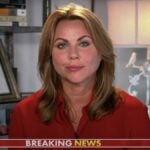