He started as a stand-up comic, but Larry David didn’t even give himself a chance to die, famously surveying the audience one night and exclaiming, “This isn’t gonna work” … then exiting without telling a single joke. Next came a coveted spot on “Saturday Night Live,” where only one of his sketches ever made it on air. Despondent but not defeated, he came up with a sitcom about him and his friends doing nothing. The show, of course, was “Seinfeld,” and it earned David over $200 million. His current HBO series, “Curb Your Enthusiasm,” also about nothing, is entering its seventh season.

This week David makes his jump to the big screen in Woody Allen’s “Whatever Works,” in which he plays a neurotic misanthrope in shorts and a bathrobe who falls for a witless ingénue from the south. If it sounds like typecasting, think again. Larry David wouldn’t be caught dead in a pair of shorts.

You’ve been known to often try to talk your way out of role — that you get cold feet.
I feel that way about everything … “A date, I’m not up to the task!” That’s life for me: “Not up to the task.” I felt that way when I first got the script for "Whatever Works" and saw how big the part was. 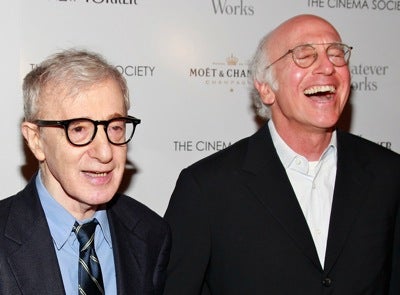 Is that kind of self doubt ever paralyzing?
Well, you’re always hoping that something will get you out of it. The date will call and cancel. “Oh, you can’t make it? Oh, that’s a shame. Ah jeez, oh, okay … maybe next time.” Or that Woody would call, “Y’know, we decided to go in another direction.” “Oh, whatever, I understand.” A lot of times those calls don’t come, so you have to put a gun to your head and get through it.

Woody didn’t make that call. Were you nervous working with him?
Yeah, I don’t want to screw it up, that’s for sure. You’re aware of that. On the other hand, you know that if there’s something that’s not to Woody’s liking, he’ll get it to his liking. But there was a little more pressure doing that, certainly, than there is in doing an episode of “Curb Your Enthusiasm.”

How did they get you to wear shorts?
It was actually my idea.

Woody wrote the script 30 years ago with Zero Mostel in mind. Did it have to be rewritten for you?
No, the only thing … there was a character description on the first page of the script that described Zero Mostel to a T, but that was it.

When there’s a Woody Allen film without Woody in it, the lead actor usually ends up doing a Woody impression. Even Kenneth Branaugh …
I know that’s a trap to fall into, cause others have done it. I am saying his words, but at no point am I doing him … though, for that matter, you can say that everybody’s doing him, because they’re all his words.

What about Woody’s directing style? Did you get nervous when he didn’t comment after takes?
No, no I didn’t. When there was something that wasn’t to his liking or to his tastes, he would certainly point it out to me, but it was in a very easygoing way. I suppose the worse you are, the more he’ll tell you. But if you’re that bad, he’ll replace you.

The story is you quit “Saturday Night Live” when you were a writer there, then came back two days later as if nothing ever happened.
I came back. This movie is the only enterprise that I’ve ever been involved in that I haven’t quit.

Why did you go back?
I just thought it was a good idea. Yes, they gave me a few looks, but then we had a meeting and the producer never said a word to me.

They just let it go?
I came back like nothing ever happened.

And of course you did an episode of “Seinfeld” where George does the same thing. How much of George is based on you?
Oh, I don’t know.  It’s certainly a big part of me, his shortcomings as well.

You take notes from real life and use them on “Curb Your Enthusiasm.” Can you give an example?
Things might just catch my eye or strike me a certain way. “Do I have to thank that woman? She didn’t pay for the meal … Her husband paid, why am I thanking her?’ You know, just things like that.

It’s going into its seventh season. How long before this thing runs out of gas?
We’ll see what happens. I’ll stop when I feel like that moment has arrived, but so far so good. If a network keeps picking you up and you keep doing good shows, it could probably go on for a while.

Where do you see yourself in five years? Any plans?
I’m going to be a concert pianist.