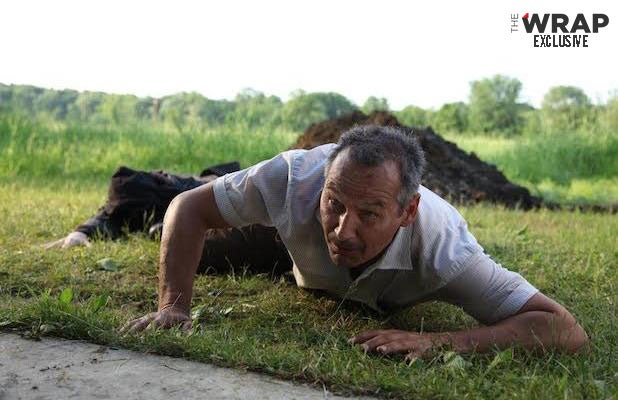 Nick Damici has become one of the leading names in genre filmmaking over the last five years, writing and starring in critical and fan favorites such as “Stake Land,” “We Are What We Are” and this year’s Sundance hit “Cold in July,” which sold to IFC for just about $2 million.

Now, he’s headed back to Austin’s SXSW, perhaps the premiere town for genre filmmakers, to debut his latest project, “Late Phases,” a midnight movie that represents the beginning of a new era in his career.

The 54-year-old New Yorker hasn’t seen the finished movie  yet, but as he told TheWrap during an interview at his apartment this week, he’s incredibly excited to see himself play a 70-year-old blind man who has to battle werewolves after they kill his seeing eye-dog during his first day at a haunted retirement community.

“They shaved my head, thinned me out up here, I was bald for almost three months,” he explained. “Then they did prosthetics. Plus I’m blind in it so I had to wear contacts and act blind. I got to be my dad, it was really fun for me.”

Producer Greg Newman, who previously worked on “Stake Land” with Damici, offered to work to make the character younger, a proposition that Damici declined. He considers himself a working man — “acting is just my trade” — and was actually very pumped up to learn to play blind before the shot.

“I did a lot of weird shit, I blindfolded myself a lot, I did my routine, made coffee, spilled a lot, burned myself a few times,” he remembered, laughing. “The hardest thing was lighting cigarettes blind, it drove me fucking crazy until I got it down to a way of doing it. What I started to do was thinking about focusing my eyes. And I just came up with this weird thing, that blind people look like they see peripherally. Right now I’m looking at you, but a blind person can address you, but they can never look at you when they’re talking. And as long as you stay with your peripheral vision and look up, blind people never look down. That seemed to work.”

A New York native who went to high school in New Jersey, worked for UPS and then came back to the city to pursue acting, Damici is a gruff guy who smokes like a chimney during a house fire; on the street, you might mistake for a Teamster. As such he had to make his own opportunities. This is the first film that he has led without also being the screenwriter, a skill he was advised to pick up while he was studying performance in his late 20’s and early 30’s.

He began appearing on cop shows and in films by the late 90’s, piling up credits on procedurals like “Law & Order” and crossing between the NY and Miami editions of “CSI.” He also appeared in the film “World Trade Center,” among many others, but now that he’s found his niche, he has little interest in returning to mainstream genres.

“I like the horror genre. If I was the world’s next Vincent Price, I’d be the happiest guy in the world,” he said. “I don’t even want to do another drama in my life, I couldn’t care less. As an actor, I don’t care. I don’t want to do cop stories, I don’t give a shit. Contemporary stuff, throw it out. I like period pieces.”

Both “We Are What We Are” and “Stake Land” were considered more serious genre films, of course, mixing vampires and cannibals with meditations on religion and family. “Late Phases” is more of a fun film, but for the most part, the messages he wants to send can be built into horror.

“I just think it’s a great place, you can really have fun and explore stuff without taking a big stand of, ‘I’m making an important movie,'” Damici said, puffing up his chest in a sort of mockery of the industry. “Do I want to see another slave movie? No! Do I want to see another concentration camp movie? No, I’ve seen them. [In horror] you can slip this stuff in, but it’s not beating you on the head. And you always get, oh good the vampires are back! I believe it’s entertainment and that’s all it is.

“I don’t think it’s anything important or precious, I can’t watch the Academy Awards or any of these shows,” he continued, “I can’t stand these people patting themselves on the back and acting like they saved the world, they’re all actors. Spoiled fucking actors. I’m not begrudging them for it, they’re brilliant actors, but I’m like, c’mon, what is this? It’s just an advertising thing for the industry.”

Again, Damici considers himself more of a working class guy than artist, and laughs when his family assumes that being on the big screen means having big money. Finding financing for his various projects is always a challenge, and if it weren’t for his apartment being rent-controlled, he says he wouldn’t be living there, given the increasing rents in the city. But he just keeps on plugging, riding a hot streak that should soon include several TV shows.

“Oh me and Jim have quite a backup log of movies we may never get to make,” he said. “We keep working. We’ve just reached a point now where it’s like, four movies in, we realize this system’s changed so much, it’s just so hard to make money on our level. You’re making $2 million movies a pop at this point, you’re like, I’m getting paid what I got paid last time! Wait a minute!”

Below, see the film’s poster and another exclusive still: