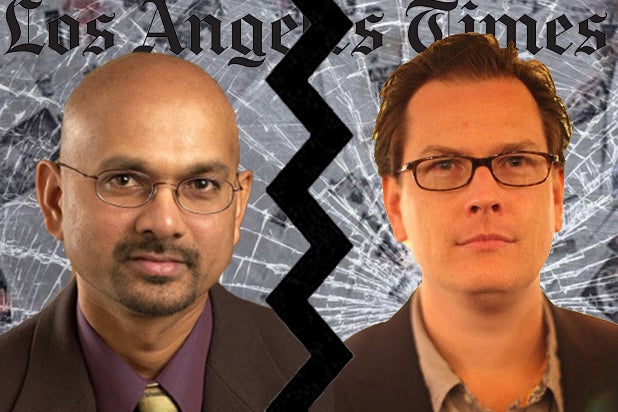 It’s disturbing when a Pulitzer-nominated investigative reporter is summarily fired by a newspaper, but especially so when the reasons for the firing fail to add up.

In a swift move that has shaken the L.A. Times newsroom, reporter Jason Felch was fired a week ago after Occidental College officials chose to challenge a front-page story he had written three months previously about sexual assaults that the college allegedly failed to report.

On Friday, L.A. Times editor Davan Maharaj briefed investigative reporters about the Felch mess in order to figure out lessons learned and “to assuage concerns,” TheWrap has learned.

An initial look into the circumstances of the firing reveals a tangled web of  relationships around the controversy, some of which raise questions about the internal politics of the L.A. Times.

Felch was fired, we were told, because he had an affair with one of the sources on his story. Felch does not deny the affair, but insists that it began after the publication of his Dec. 7 disputed story. He confessed the affair voluntarily, not expecting it to lead to his dismissal.

He was fired shortly thereafter.

What does this all amount to? Overly close journalist-source-PR relationships over a story that actually matters – the question of unreported sexual assault on a leading California campus. Should Felch have paid the price of his job? Why isn’t an editor being held accountable for it? What about Maharaj and his review of the article? There’s more here than meets the eye and not enough to satisfy this journalist’s curiosity about a curious unfolding of events between two powerful institutions.

For the record: A previous version of this story misstated when Felch disclosed his affair. It was before Bunting met with editor Davan Maharaj. TheWrap regrets the error.