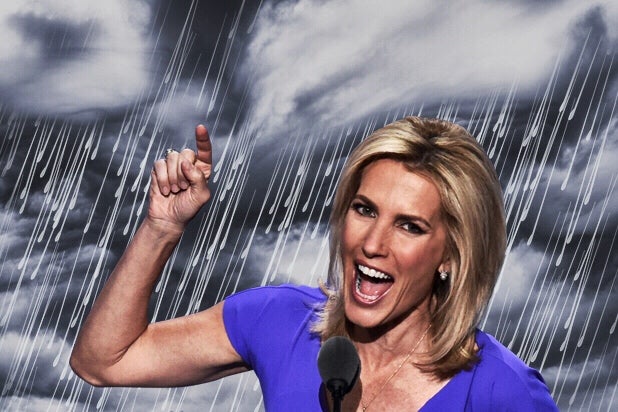 Fox News host Laura Ingraham could be facing an existential threat to her brief tenure as the host of a primetime TV show over her handling of a tweet mocking Parkland, Florida, school shooting survivor David Hogg, according to industry insiders.

“Her apology has been inadequate so far,” Joe Peyronnin, a former president of Fox News, told TheWrap. “If it is dragging down their revenues significantly and she has not addressed it in such a way that advertisers will return it could be fatal for sure.”

As of Friday, at least 10 sponsors had announced they would stop advertising on “The Ingraham Angle” despite her Thursday apology to Hogg for a tweet accusing the 17-year-old of whining about his rejection from four California colleges to which he had applied.

“It’s going to be a business decision,” Peyronnin said. “Look at how long Fox News hung on with people being charged with sexual harassment or mistreatment. It took them a while but ultimately when they saw their business being damaged for the long term, they made decisions.”

One senior Fox News staffer said that the imbroglio is a major distraction for the network. “It’s disappointing. Just when we were out of the spotlight we find ourselves right back in the center. It’s distracting. It’s embarrassing,” the insider told TheWrap.

Though Ingraham has long been a fixture in conservative talk radio, she is a relative newcomer to TV hosting, only taking the helm of her own show in Fox in last October.

While she debuted to impressive ratings and scored an average of 2.6 million total viewers in February, she has lagged behind both her primetime colleagues, Sean Hannity and Tucker Carlson, as well as MSNBC rival Rachel Maddow.

Targeted advertiser boycotts are no laughing matter at the network. A sustained 2016 campaign led by the liberal watchdog group Media Matters for America ultimately led the channel last spring to cut ties with Bill O’Reilly — then its top ratings star.

Reps for Fox News did not respond to multiple request for comment over the matter.

Others industry insiders were more hopeful that Ingraham could weather this firestorm, noting that the network was unlikely to want to be seen caving to left-wing pressure over a single tweet.

“Minus any new tweets from her I believe her job is secure. If she was fired over a tweet at the hands of what the right sees as an anti-2nd amendment zealot, Fox’s base (and the right in general) would revolt,” Jon Nicosia, a former managing editor of Mediaite and Independent Journal Review, told TheWrap via text.

“I think Fox saw 8 (and counting) advertisers pulling ads from her show and pressured her to say something,” he said. “Fox, no matter how much they want to stand behind their talent is not going to do It with a tweet like hers.”

Another former senior Fox News executive put it another way. “All you have to do is look at Roseanne’s success,” the individual said. “This [boycott] won’t mean a thing.”

Jeff Jarvis, a founder of Entertainment Weekly and current professor of journalism at the City University of New York, said the Ingraham imbroglio was just another example of why advertisers needed to rethink traditional models of how to reach conservative audiences.

“I would propose to advertisers who want to reach conservative America that they would be well-served by pledging support to a new and less divisive and more responsible outlet,” Jarvis told TheWrap.

“When brands could not find the environments they wanted for their messages, they helped create soap operas and shows such as ‘Northern Exposure,'” he said. “Wouldn’t it be to their benefit to help fund an alternative to Fox News?”