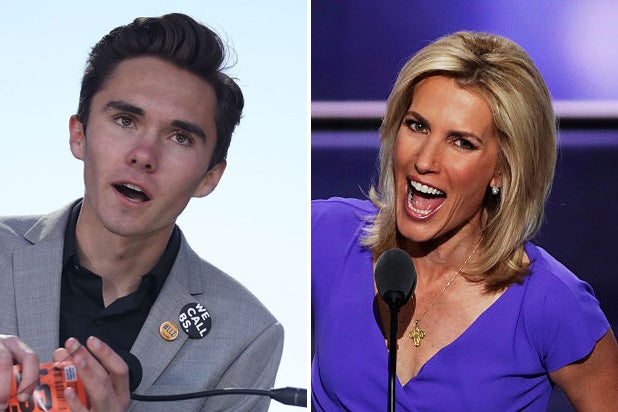 All day Thursday, Laura Ingraham weathered an advertiser exodus spearheaded by Parkland shooting survivor David Hogg. But you wouldn’t have known it from watching Thursday’s episode of her Fox News show.

Ingraham, who was roundly criticized for publicly mocking Hogg after he was rejected by several California colleges, didn’t address the boycott that, as of her airtime, saw at least eight advertisers cut ties. She also didn’t follow up on the apology she tweeted out earlier in the day.

Instead, she focused on illegal immigration, funding for the border wall and the departure of former Secretary of Veterans Affairs David Shulkin.

The confrontation began Wednesday when Ingraham tweeted an article about Hogg’s rejection by UCLA and other schools, adding she thinks he “whines” about it. Ingraham was widely criticized for the joke, and later in the day Hogg called on his followers to boycott 12 of her sponsors.

On Thursday morning, after three advertisers bolted, Ingraham attempted to mitigate the situation with an apology. “On reflection, in the spirit of Holy Week, I apologize for any upset or hurt my tweet caused him or any of the brave victims of Parkland,” she tweeted.

“For the record, I believe my show was the first to feature David immediately after that horrific shooting and even noted how ‘poised’ he was given the tragedy,” she continued. “As always, he’s welcome to return to the show anytime for a productive discussion.”

Hogg later tweeted that “She only apologized after we went after her advertisers. It kind of speaks for itself.”

It wasn’t all silence on the Parkland front, however. Ingraham did mention the Marjory Stoneman Douglas shooting one time — during a segment on women who have supposedly flooded the shooter with fan mail.