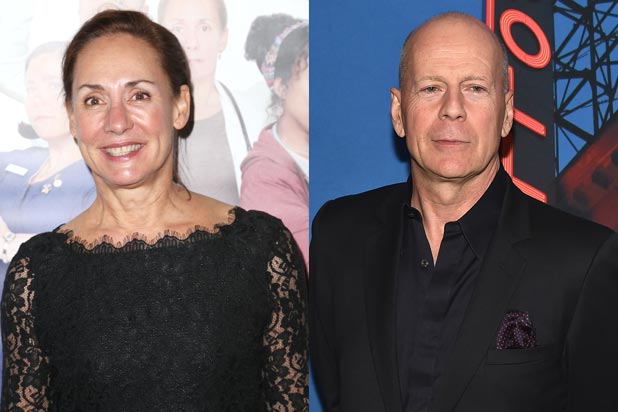 Laurie Metcalf will star opposite Bruce Willis in the Broadway production of “Misery,” producers of the play announced Tuesday.

Metcalf, a three-time Emmy Award winner and two-time Tony Award nominee, is an original member of the Steppenwolf Theatre. She was last seen on the New York stage in Lincoln Center’s production of Bruce Norris’ “Domesticated,” and in her Tony Award-nominated performance in Manhattan Theatre Club’s production of Sharr White’s “The Other Place.”

She received three Emmy Awards for her work on the TV series “Roseanne,” stars in HBO’s “Getting On,” and has a recurring role on “The Big Bang Theory.” Her films include “Desperately Seeking Susan,” “Leaving Las Vegas,” “JFK,” “International Affairs” and the “Toy Story” series.

“Misery,” based on the Stephen King novel and subsequent film, follows romance novelist Paul Sheldon (Willis) after he is rescued from a car crash by his “number one fan,” Annie Wilkes (Metcalf), and wakes up captive in her secluded home.

While Paul is convalescing, Annie reads the manuscript to his newest novel and becomes enraged when she discovers the author has killed off her favorite character, Misery Chastain. Annie forces Paul to write a new “Misery” novel, and he quickly realizes Annie has no intention of letting him go anywhere.

Elizabeth Marvel, who had been previously announced for the role of Annie Wilkes, had to withdraw from the production due to scheduling conflicts. Marvel is a regular on the Netflix series “House of Cards.”

The play was written by two-time Academy Award-winner William Goldman (“The Princess Bride,” “Butch Cassidy and the Sundance Kid”) who wrote the screenplay for the Academy Award-winning film. Will Frears (Omnium Gatherum) is directing.

The 1990 film version was directed by Rob Reiner and released in 1990, starring James Caan and Kathy Bates, who won an Academy Award and Golden Globe for her performance as Annie Wilkes.