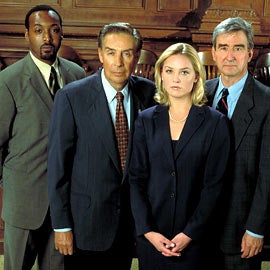 Despite rumblings Thursday night that NBC’s "Law & Order" might be granted a last-minute reprieve, reports of its demise proved accurate.

NBC announced on Friday that it had canceled the Dick Wolf’s long-running procedural, officially making its current 20th season its last.

"The full measure of the collective contributions made by Dick Wolf and his ‘Law & Order’ franchise over the last two decades to the success of NBC and Universal Media Studios cannot be overstated," Jeff Gaspin, chairman of NBC Universal Television Entertainment, said in a statement.

"The legacy of his original ‘Law & Order’ series will continue to make an impact like no other series before."

As for Wolf, the producer gave a terser post-mortem for the series.

One bright spot for fans of the venerable franchise: NBC cushioned the blow of the cancellation by announcing that it had renewed "Law & Order: SVU" and picked up a new drama, "Law & Order: Los Angeles."

Though NBC said Thursday that a decision had not been reached, the show’s staff was informed Thursday that the series was ending and that they would not be needed to begin production in July, according to an individual with knowledge of the situation.

Reached shortly after the final word was announced, Waterston had changed his tune substantially.

"Well, I don’t have any further thoughts than what I said before. Thanks. See you later. Bye," Waterston told TheWrap.

The latest installment in the "L&O" canon presumably will rely on the same ripped-from-the-headlines format, but removing the show from its Manhattan confines and resetting it in sunny Los Angeles.