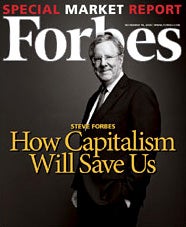 On Monday, Steve Forbes warned his staff that cuts were imminent. On Wednesday, they came down.

Just how many layoffs there were today is unclear – possibly up to 100, according to a source, though Forbes isn’t saying. I’m told cuts have been made across the entire company, including editorial and the business side.

Dan Frommer, an editor at Silicon Alley Insider, announced via Twitter that 100 were cut, including his girlfriend, Lauren Sherman, a fashion and lifestyle writer.

“We — and the entire media world — have been hit hard by both the severe recession and the seismic shifts wrought by the Web,” Forbes wrote in the Monday memo. “Given these dramatic events, further layoffs, unfortunately, are necessary across the entire organization.”

Just how hard has Forbes been hit? Ad pages were down 30.8 percent through September, according to the Publishers Information Bureau, which tracks ad performance for the consumer magazine industry — which is slightly worse than the industry’s 27.2 percent slide.

Forbes’ estimated ad revenue plummeted 25.7 percent during the first nine months of the year — a decline of roughly $54.7 million.

Even for a guy like Steve Forbes, that kind of slide is eye-opening.