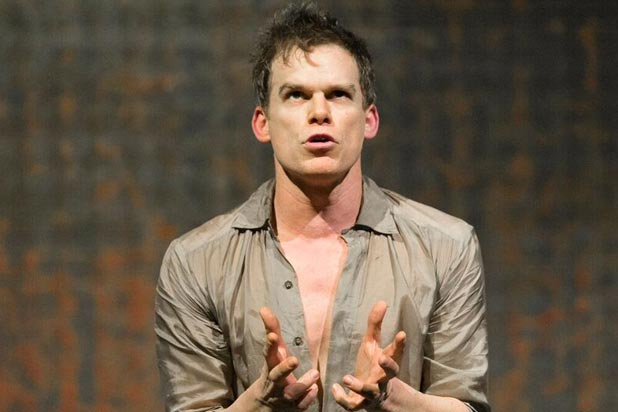 It’s the best jukebox musical ever. That may not sound like much of a compliment, but when you put David Bowie‘s musical catalogue at the service of book writers Bowie and Enda Walsh and director Ivo van Hove, the result is more than unique. It’s terrific must-see theater. Opening Monday at Off Broadway’s New York Theatre Workshop, “Lazarus” is “inspired” by Walter Tevis’ novel “The Man Who Fell to Earth,” which Nicolas Roeg made into a successful sci-fi film starring Bowie in 1976.

In the movie and novel, the alien Newton escapes from the hotel-prison where he has been held captive, addicted to alcohol and television. The musical version begins with that imprisonment and only makes occasional references to the government that has kept Newton (Michael C. Hall at his most tortured) prisoner.

In the NYTW credits, the government is represented by characters listed as the Teenage Girl 1, 2, and 3 (Krystina Alabado, Krista Pioppi, Brynn Williams) who keep glancing at their program to help the alien. Newton, on the other hand, keeps referring to characters, especially the Girl (Sophia Anne Caruso) as not being real, as a projection of his imagination.

At one point, the Girl gives us some backstory regarding the alien, “You were sent here from another planet and you never got back to your family. You got real rich — started a bunch of companies. You tried to leave once before – and people did experiments on you and they hurt you really bad – turned you crazy….”

None of this gives you any idea of what it’s like to experience “Lazarus” in the theater. Imagine falling asleep to a TCM festival of film noir classics, interspersed with Melies’ “A Trip to the Moon.” Your resulting nightmare, informed by all those movies on TV, is “Lazarus.” 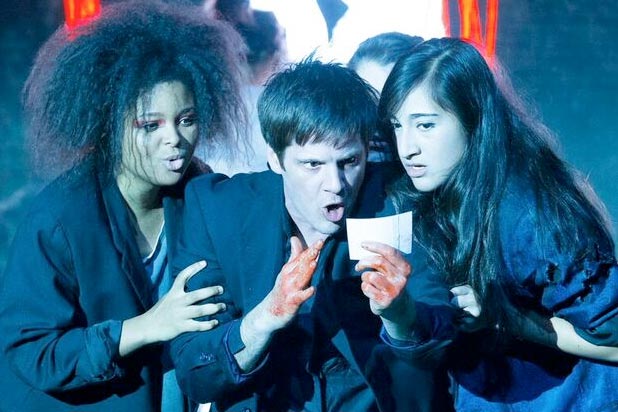 The only difference is that “Lazarus” eschews gunfire. Murder here is up-close and personal, and committed by an almost ever-present knife held by a man in black named Valentine (Michael Esper being malovent in the nicest way possible). Valentine keeps showing up at people’s apartments uninvited. He’s terribly friendly until he’s terribly lethal, and Newton, cowering in the corner, is powerless to stop the mayhem.

“Lazarus” could be subtitled “Murder Most Extravagant.” To signal one killing, the giant TV screen that dominates the stage slowly turns red. After another stabbing, the victim appears to bleed milk. And there’s one effect with dozens of giant black balloons that epitomizes your worst fear, whatever it may be.

One couple (Lynn Craig, Nicholas Christopher) can’t stop groping each other, another couple (Cristin Milloti, Bobby Moreno) no longer has sex. That prompts Milloti’s character attempts to become Newton’s girlfriend Mary-Lou (Candy Clark in the movie version), complete with blue hair. “It makes you look like a Smurf,” her boyfriend says. At times there are three Mary-Lous on stage: Milloti, Caruso, and a woman projected on the TV screen. 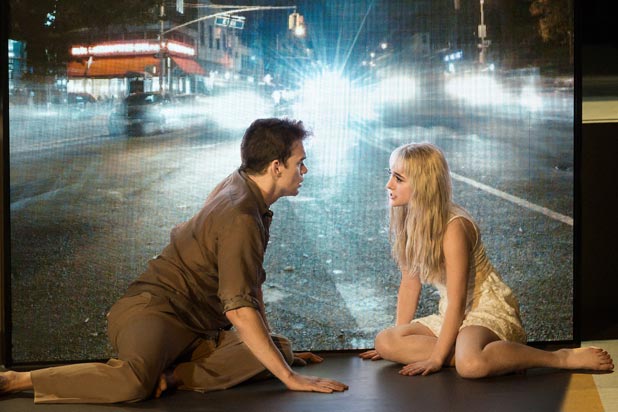 Creepier yet are the band members, positioned upstage in a box within the larger box of Jan Versweyveld’s set. They observe Newton from behind a glass wall, except at those moments when draperies descend and the alien travels to Asia or Berlin in the 1950s, among other places.

It’s a high-tech musical, except for the spaceship that Newton and the Girl put together with masking tape. It’s cruder than anything in 1902’s “A Trip to the Moon.” The good news is that Newton uses it to escape not only the planet Earth but his nightmare. “Lazarus” ultimately is a trip not to outer space but to our common inner space.

I haven’t experienced something this equal parts baffling and mesmerizing since David Lynch‘s “Muholland Drive.”