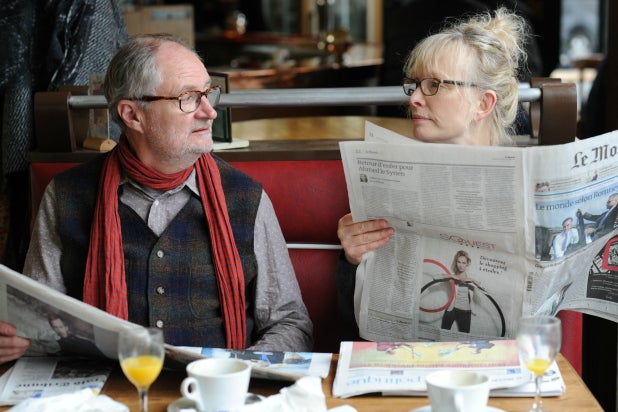 Paris is a famed aphrodisiac but an unreliable marriage counselor. Then again, even with all its charms,  the City of Love might not be able to save the marriage between British sexagenarians Meg and Nick (Lindsay Duncan and Jim Broadbent), a sexless pair whose union is built on rivalrous rebukes and shared disappointment.

Penned by Hanif Kureishi (“My Beautiful Laundrette”), their war of words is initially a nasty delight. “I’ve taken up Zumba,” Meg announces. “I’m redesigning my body.” “Why? Who’s going to see it?” shrugs Nick. Later, he’s less cavalier, reduced to begging: “Can I touch you?” “What for?” she snaps.

Not that Meg and Nick are entirely incapable of enjoying themselves: Upon returning to the site of her honeymoon so many decades ago, Meg strives to make Paris her own by impulsively booking a room at the first palatial hotel she sees. Frugal Nick trails behind her with courteous protests like a bumbling royal servant who knows better than to affront his betters. He grumbles that Paris is a “brilliantly designed machine for extracting all our money,” but he’s willing to be bowled over by the culinary treasures it has to offer.

Seduction, though, remains out of reach. “Why won’t you ever let me touch you?” Nick demands. He doesn’t just want to be desired, but to be congratulated for still finding his wife attractive. But Meg won’t indulge his possessiveness or his self-righteousness. “It’s not love,” she answers. “It’s like being arrested.”

In one of the film’s strongest character moments, Kureishi reveals that husband and wife have learned to get along not by forgiving one another but by trading favors. Back in the hotel room, Meg accidentally cuts the side of Nick’s neck with a soda-can tab he’d earlier fashioned into an impromptu re-engagement ring. Nick isn’t mad, but he knows he can turn the injury into an advantage. “Show me your breasts,” he orders, and for once Meg complies; it’s the way she knows to keep the peace, and it’s the only time in the film when she reveals her chest to her husband.

“Le Week-End” gradually finds Nick and Meg rediscovering the glimmers of passion and twinges of nostalgia that have kept them together over the years, but Meg is quick to be suspicious of her feelings, as well as her husband’s. After decades of marriage, where does love end and dependency begin? When Nick spots an elderly couple walking together and muses that that’ll be them in ten years, she sneers in a Victorian headmistress’ voice, “Is that the height of your ambition?”

After Nick confesses a terrible mistake that jeopardizes their future well-being, Meg finally broaches the subject of divorce. What follows is a series of sensitive, droll, and intelligent discussions about when marriage is worth the effort and when it isn’t. Those conversations continue at a dinner party hosted by Morgan (Jeff Goldblum), a protégé of Nick’s who has not only surpassed him professionally but also has a wife half his age to boot.

Bickering has rarely been so beautiful — or so tenderly affecting.