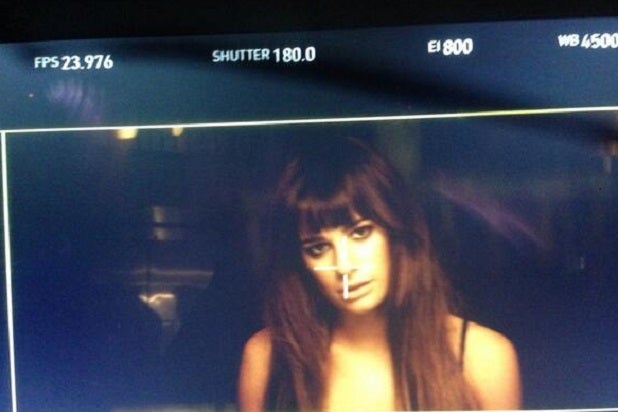 “Glee” star Lea Michele is ramping up to release her debut solo album, and on Sunday the actress teased fans with photos from the set of the video for her first single.

“SO EXCITED SHOOTING MY VERY FIRST MUSIC VIDEO TODAY FOR THE FIRST ALBUM SINGLE!” Lea wrote, letting her caps-lock key express her enthusiasm for her.

The photos don’t reveal much (read: anything) about the plot of the video, though they do offer shots of Michele’s image in a monitor, along with pics of cameras and lights ready to spring into action.

Though further details about the shoot and the album were scarce, Michele revealed to Elle (via Us magazine) that the upcoming LP will include a tribute to Cory Monteith, her “Glee” co-star and real-life boyfriend, who died over the summer at age 31 after a struggle with drug abuse.

“The album was done, and the label said, ‘Do you want to add anything?’ I was like, ‘I might regret it if I don’t,'” Michele said of the song, titled “You’re Mine.”

“It makes me so happy, this song,” Michele added. “It makes me think so much of Cory. It was ours. When I think if him, I play this.”