Cesar Millan came to America in 1990 — poor, homeless and unable to speak English. Next week, he celebrates his 40th birthday as a best-selling author, entrepreneur and star of the hit reality series that helped put the National Geographic Channel on the viewing map in more than 50 countries worldwide. “Dog Whisperer with Cesar Millan,” currently in its fifth season, airs a special, undercover investigation of American puppy mills this weekend. Millan talked with Eric Estrin about the power of the pack and his biggest two- and four-legged celebrity influences.

At an early age in Mexico, I developed a trust and respect for dogs, and even at the young age of 13 I knew that I wanted to be the best dog trainer in the world. I thought that was the only thing available to me. 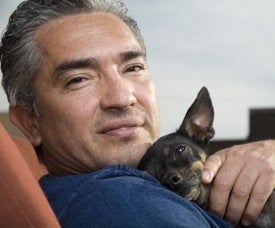 I worked in a kennel in Mexico, so I knew a little bit about what was required to maintain dogs. I never worked against Mother Nature, and that just gave me the opportunity to work and understand dogs and give dogs what they need. Simple things, as I see it, but I guess not so simple for a lot of people.

The two guys that really motivated me to come to America were Lassie and Rin Tin Tin. I watched them on TV in Mexico, and I wanted to learn from the Americans how to train those dogs. I never did get to meet them, but I eventually got to meet Lassie’s grandson.

What I realized after I was in America for a little while was that dogs were “trained” here, but they were not balanced. I never experienced an unstable dog in Mexico in my life. They’re actually much more comfortable to be with, you know.

So that’s when I said, you know what, I’m just gonna practice what I know — and these dogs, what they need is just the power of the pack. That’s when I started creating a pack of dogs that would follow me around L.A.

I also realized it wasn’t just about rehabilitating dogs but about training people. So it changed from dog training to human training.

And then I started to be interviewed by a lot of different places. The way people knew me was the Mexican guy who can walk a pack of dogs in South Central. People became intrigued about it and they wanted to interview me.

When a reporter from the Los Angeles Times, interviewed me, one of the things I said was that I wanted to have a television show about what I was doing. Some producers read the interview, and they came to the dog psychology center I started to see what I was doing and to talk to me.

Because of all the interviews, a lot of movie stars and a lot of famous people began seeking my help. Most of these celebrity people they have powerful breeds, and a lot of trainers don’t know what to do with that power. And so they find out there’s a guy over there who can probably walk a pit bull and German shepherd and rottweiler together, and I don’t know how he does it, but he does it.

That’s how people started coming my way and looking for my expertise.

My English was really bad, and she said, Well you need to speak English first of all. I love what you do, but you have to be able to explain it.

I was learning from the radio. I stayed away from my Latino community for a while so I could submerge myself in the English speaking community, and then Jada paid for a teacher for a year to come and teach me. Because of her, I understood how to put the verbs in the right place.

A few months after I met Jada, I met Will. And so, for many, many years, while they got their marriage going and their careers, all this time I was their own personal dog whisperer. So I was around media experts. I could always call Jada and ask for advice. I could call Will and ask for advice. You know, they’re very, very generous people with their time and with their knowledge.

I’m a big faith believer — whatever you want you manifest it. So yeah, I became more comfortable, I became more knowledgeable, I understood what direction I needed to take — and I keep praying.