It's the basketball version of “The Bachelor.”

LeBron James – the coveted NBA free agent — said on Wednesday that he will announce the team with which he plans to sign on Thursday during a one-hour primetime television special broadcast on ESPN.

According to ESPN, “representatives for James” contacted the network and proposed the special, "The Decision," scheduled for 9 p.m. ET.

According to the network, the James camp “requested they be allowed to sell sponsorship for the one-hour special,” with proceeds going to the Boys and Girls Clubs of America, and ESPN agreed. (The University of Phoenix, Bing, Vitaminwater and McDonald's will serve as sponsors.)

On Tuesday, James joined Twitter, racking up more than 200,000 followers in the first day and fueling speculation that he might use the social messaging service to announce his decision.

Stuart Scott will host "The Decision," along with ESPN NBA analysts Michael Wilbon and Jon Barry. The network said Jim Gray will "conduct the first interview with James in which he announces his decision." Wilbon "will also have an extensive interview with James."

ESPN said its 6 p.m. ET "SportsCenter" will expand to three hours leading into the hour-long "The Decision" at 9 p.m. Following “The Decision,” the network will televise an expanded "SportsCenter" from 10 p.m.-midnight (9 p.m. PT). And "ESPN will also have reporters at the team headquarters of several teams which have been most active in free agency."

It’s a coup for ESPN, which launched a dedicated “LeBron Tracker” page on its website, replete with a countdown clock ticking away the hours before the NBA’s free agency signing period began. 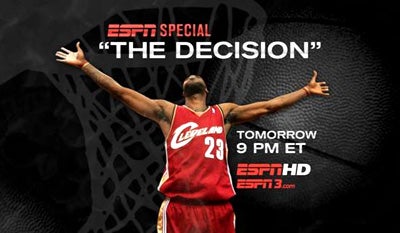 Maverick Carter, CEO of LRMR Marketing, said today that LeBron James will formally announce where he will play next season and beyond on “The Decision,” which will air live on Thursday, July 8, at 9 pm ET on ESPN.

Due to the unprecedented attention and interest surrounding LeBron's decision, we have decided to make this announcement on national television. By doing so we have generated funds that will be given to the Boys and Girls Clubs of America. LeBron has a longstanding commitment to giving back to the community, and has worked with the Boys and Girls Clubs in cities across the country.

UPDATE #2: Responding to criticism over its decision to air "The Decision," ESPN said late Wednesday that James' announcement will come within the first 15 minutes of the broadcast.