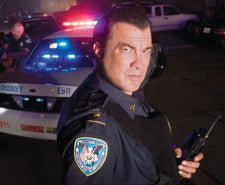 A&E and the production company Genuine/Idea Factory have been duking it out for months over a show that might not ever make it back on the air.

The cable network hoped to have the trial over "Steven Seagal: Lawman" in New York, but on Thursday U.S. District Court Judge Richard Holwell sent the case back to California.

Genuine claims A&E took its idea for the reality show, which chronicles Seagal’s work as a reserve sheriff’s deputy in Louisiana.

The production company argues it had an oral agreement with Seagal allowing it to pitch the show to prospective networks. Genuine says it pitched the show to A&E, which liked the show so much that it ended up going to Seagal directly and making a deal without Genuine.

Lawyers for Genuine say they sent a letter to A&E on Aug. 20, 2009, outlining their claim and threatening a lawsuit if the matter was not resolved within 10 days.

Four days later, A&E filed a pre-emptive suit in New York. Genuine filed a suit of its own the next day in Los Angeles.

A&E then moved to stop Genuine’s suit, on the grounds that the network’s case in New York was filed first, but the California courts refused to grant the request, arguing that A&E acted in "bad faith" by attempting to pre-empt Genuine’s lawsuit

All of this legal wrangling may be for naught as the future of the show is currently in doubt.

"Lawman" premiered last December, and the first season wrapped up in February, but the show was suspended in April after a former administrative assistant sued Seagal for sexual harassment, accusing him of maintaining a network of "sex slaves."

There’s no word on whether production has resumed. As of this writing, neither A&E, Steven Seagal or his production company has responded to requests to comment on this story.