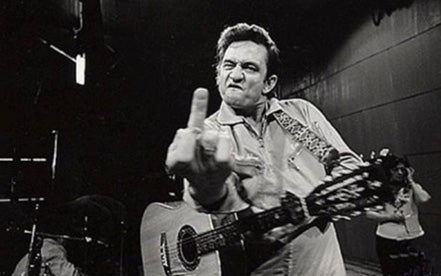 Legendary rock photographer Jim Marshall, who captured some of the most memorable moments in music — Johnny Cash flipping the bird at San Quentin and Jimi Hendrix burning his guitar at Monterey Pop — died in his sleep Tuesday in a New York hotel. He was 74. The cause of death was not immediately known.

Mr. Marshall’s unparalleled access, technical talent and musical passion merged to create hundreds of album and magazine covers, turning him into a household name among the biggest names in rock ‘n’ roll.

As the chief photographer at Woodstock, he captured The Who greeting the sunrise. When the Beatles played their final concert at San Francisco’s Candlestick Park in 1966, Mr. Marshall was the only shooter invited backstage. He photographed the Rolling Stones, the Grateful Dead, Janis Joplin, Ray Charles and Thelonious Monk.