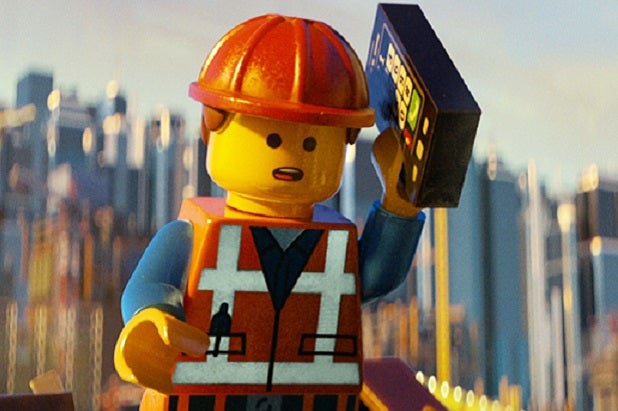 “The Lego Movie,” the animated comedy based on plastic building blocks and and filled with pokes at pop culture, has built itself into a blockbuster.

In its second frame, Warner Bros.’ triumphant return to animation is dominating the Presidents Day weekend box office – it took in $20 million on Saturday alone — and looks like it will make more than $60 million over the four days. Its Friday-Sunday total will hit nearly $49 million, down just 29 percent from its opening last weekend. That’s a terrific hold for the up-and-coming writing/directing team of Phil Lord and Chris Miller, given that a 50 percent drop is considered good.

“The Lego Movie” is nearly doubling the total of the runner-up movie, the Kevin Hart romantic comedy “About Last Night,” which is heading for a $27 million three-day total and $30 million over the long holiday weekend, impressive given its R-rating.

Sony-distributed movies took the next two spots as well.

MGM’s “Robocop” surged on Saturday and will finish at around $21 million for the three days and roughly $25 million for the four. That will give the action remake starring Joel Kinnaman a softer-than-expected $30 million since its opening Wednesday.

George Clooney‘s World War II art heist thriller “The Monuments Men” was holding well in fourth, and will take in about $15 million over the three days. That’s just a 32 percent drop from its opening weekend, and around $17 million for the four days, and its domestic total is up to $43 million.

The “Endless Love” update, with Alex Pettyfer and Gabriella Wilde in the roles played by Martin Hewitt and Brooke Shields in the 1981 original, on Saturday dropped 52 percent from its Valentine’s Day opening. It’s still on pace to finish the three days with $13 million and the four with $15 million.

“Winter’s Tale,” the feature directing debut for Akiva Goldman, was in seventh with a soft $7.7 million and will come in at about $8.5 million for the four days. That’s under expectations for the fantasy romance, which were low to begin with.

Despite storms and bitter cold in many part of the country, the overall box office was running about 25 percent ahead of last year, when “A Good Day to Die Hard,” “Identity Thief” and “Safe Haven” led the way.

The strong showing of “About Last Night,” with its $13 million production budget, is a big win for Screen Gems and continues the box-office hot streak for Hart, coming on the heels of his success in “Ride Along.” Michael Ealy, Regina Hall and Paula Patton co-star in the update of the 1986 rom-com that starred Demi Moore and Rob Lowe. It drew an audience that was 63 percent women and 43 percent under 30, and they gave it an “A-” CinemaScore.

The numbers weren’t as good for the PG-13-rated “Robocop,” which drew a “B+” CinemaScore from first-night audiences which were 62 percent male and 64 percent over 25.

It was strong on Imax, taking in $4.5 million from 340 screens, but the 3D action remake will need an overseas surge to make a profit given its $100 million production budget. It’s off to a solid start, and after opening No. 1 in 15 markets and taking in $35 million overseas this weekend, it’s up to nearly $70 million from international.

Universal marketers targeted young women with the PG-13-rated “Endless Love,” which has a roughly $20 million production budget, and scored a direct hit. The audience was 80 percent female and 76 percent under 25 years old, and they went home happy, giving it an “A-” CinemaScore.

The time-travel romance “Winter’s Tale” was beaten up by the critics and audiences weren’t much more impressed, giving it just a “B” CinemaScore.

Colin Farrell and Jessica Brown Findlay (TV’s “Downton Abbey”), Russell Crowe, Jennifer Connolly, William Hurt and Eva Marie Saint star in the first film directed by Goldsman, the writer behind behind “A Beautiful Mind” and “The Da Vinci Code,” which has a $46 million production budget.