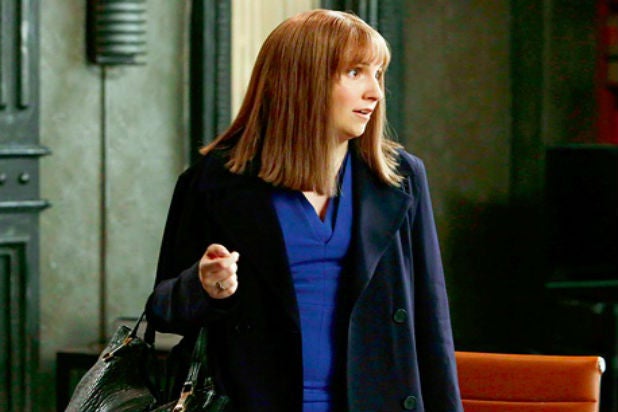 (Spoiler alert: Please do not read if you have not seen Thursday’s episode of “Scandal”)

Lena Dunham is no stranger to controversy in her real life, but her character on Thursday’s “Scandal” took it to “Fifty Shades of Grey” heights of naughtiness with a kinky tell-all book.

Sue seemed innocent enough at first and was starstruck to find Olivia Pope (Kerry Washington) on her doorstep, who asked the new author: “These men in your book — did they violate you? Do anything unwanted, force you, humiliate you? Then what right do you have to publicly violate them?”

While Sue claimed she used code names for the many, many men she had slept with, Pope said: “The press will decode those names in a matter of hours.”

“That book is a problem — make that book disappear from the planet, or you will be the problem,” she threatened.

Sue soon showed a different side of her personality when she demanded payment for the book — and all her sexual shenanigans with the government’s highest-ranking officials — to disappear.

“I want $3 million from whoever hired you,” she said, while asking Olivia “when she got so weak?” and calling her a “dried up prude.”

And so begins the hunt for all the men, which included Leo Bergen and David Rosen, that Sue slept with after meeting them on an X-rated dating website, and the appeal for them to donate to the hush money.

Olivia and her team then dug a little deeper and found out that Sue had been fired from her job for not sleeping with her boss after he sexually harassed her, so he became the target of their wrath.

Dunham was a huge hit among both “Scandal” fans and the cast for her quirky portrayal of the young woman who was described as “smart and nice … but deeply perverted.”

However, don’t expect her to repeat the guest-starring role — as her Instagram post on Thursday revealed there was no coming back.

Sue of the Dead #Scandal

Read more tweets from Dunham and the “Scandal” cast below.

Thank you @shondarhimes for introducing sexual vending machine into my vernacular

Everyone Sue boned is in a room together. This is my nightmare/truest dream #Scandal

Thank you for coming to play @lenadunham! We loved it!! You are a dream! #TGIT #ScandaI

Oh my! Did OP get inspired by Sue and her book? #scandal