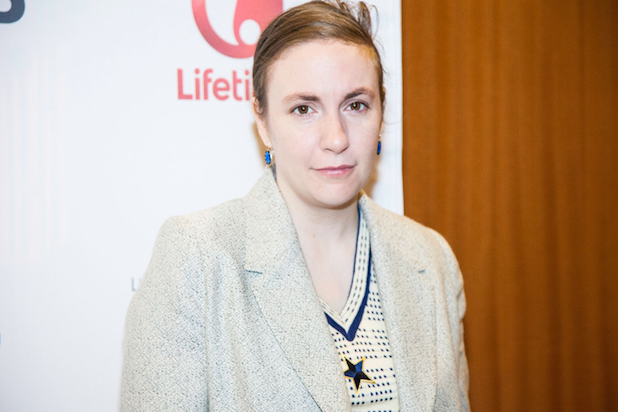 This is why we can’t have nice things. Or even pictures of Lena Dunham urinating.

“Girls” star Dunham took to Instagram on Tuesday to announce that she had deleted a photo of herself on the pot.

And you know whose fault it was? Society’s. You, us, everybody. So hang your head in shame. Or give yourself a round of applause, whatever seems appropriate.

“When you delete your own peeing Insta cuz you chronically forget what kind of world we live in but you still gotta shout out your visual influences,” Dunham wrote, along with a photo of the presumed influence — a Candie’s ad featuring Jenny McCarthy sitting on the can with her panties drawn down.

Judging from Dunham’s message, her own toilet-centric self-portrait drew negative attention. But even after removing the photo of herself, Dunham still drew wrath.

“If you people couldn’t see her putting up a pic of her peeing, then deleting it? Just to get attention and bitch about how society is f—ed up? Then you are all f—in blind to what this person is about , it’s all for click bait and attention,” wrote one detractor, who added, “Stop looking for attention you slob.”

When you delete your own peeing Insta cuz you chronically forget what kind of world we live in but you still gotta shout out your visual influences ????

“What kind of world we live in? You mean the one where people don’t want to see photos of someone literally taking a piss?” another critic chimed in. “So we should all share photos of us sh–ting and pissing because it’s normal? Lmao.”

Others took issue with Dunham drawing inspiration from McCarthy, whose stance opposing childhood vaccinations has been a fertile source of public debate.

One response offered, “Do NOT support this person who promoted fake science about autism and could be responsible for resurgence of diseases not seen in 50 years! Irresponsible!”

“Love you and your work, but I am concerned by your apparent support for this woman,” another chimed in. “She has single-handedly endangered many children by vocally promoting a debunked myth.”

At least nobody accused Dunham of having a yellow streak for deleting the photo.