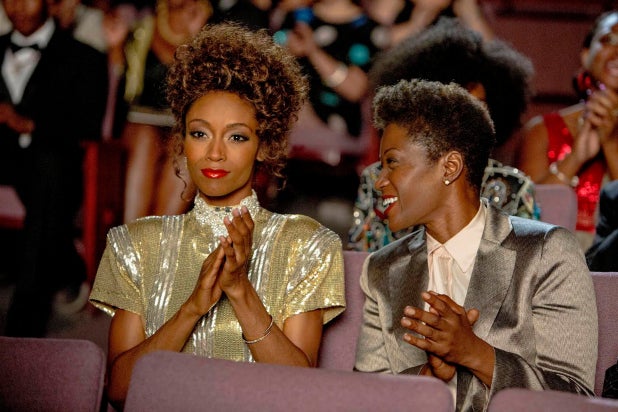 From left, Yaya DaCosta as Whitney Houston and Yolanda Ross as Robyn Crawford in Lifetime's "Whitney."

Heads up, Whitney Houston fans: the singer’s Lifetime TV biopic is set to premiere on January 17.

The highly anticipated “Whitney” marks the directorial debut of Academy Award nominee Angelina Bassett, and will cover Houston’s life through the lens of her turbulent relationship with Bobby Brown.

Beginning with Houston and Brown’s courtship, the film will show “the overwhelming rewards and consequences of the fame and fortune created by Houston’s meteoric rise that would soon overshadow them both,” the network said in a statement obtained by TheWrap.

Model-turned-actress Yaya DaCosta will play Houston, with  cast as Brown. Mega-hits from the late Houston’s catalog, including “The Greatest Love of All,” “I’m Every Woman” and “I Will Always Love You,” have been re-recorded for the movie by award-winning singer Deborah Cox.

Though the made for television movie will likely attract music lovers and social media users alike, not everyone is singing a happy tune: Houston’s mother has openly spoken out against it.

“Please let her rest,” Cissy Houston begged of Lifetime in a statement. “I find it difficult to believe people who knew and supposedly loved her would participate in a movie about her done by folks who didn’t know her. We are exhausted by the continuing misinformation and comments offered by people who did not know her.”