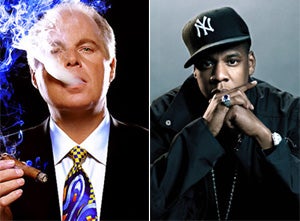 Earlier this week, a track from Jay-Z’s forthcoming album, “The Blueprint III,” was leaked online. In it, Jay-Z issued a warning to conservative pundits Bill O’Reilly and Rush Limbaugh to “fall back” and “get off my balls,” respectively:

This ain’t black vs. white, my nigga/

We off that/
Please tell Bill O’Reilly to fall back/

Tell Rush Limbaugh to get off my balls/

Fox News and O’Reilly have a long history of sparring with hip-hop, with O’Reilly serving as a frequent target of rappers like Nas — whose forcibly untitled last year included “Sly Fox” — and vice versa. (However tired, the argument against “gangsta rap” lyrics is a somewhat frequent one for the News Corp.-owned network.)

Limbaugh said on his radio show that this is the first time that he can remember being mentioned in a rap song.

But the syndicated talk show host then strangely pivoted from the “Rush vs. Jay-Z’s balls” narrative to “Obama vs. Rush’s penis.”

“I guess it means I’ve made it, I’m now in a rap tune by the famous rapper Jay-Z. ‘Tell Rush Limbaugh to get off my balls, tell Bill O’Reilly to fall back.’ I would remind the rapper Jay-Z, Mr. Z, it is President Obama who wants mandated circumcision. We had that yesterday. That means if we need to save our penises from anybody, it’s Obama. I did not know I was on anybody’s balls. I’m happy to know that they think I am though.”

(As Mediaite noted, Limbaugh apparently got the idea that Obama wants to mandate circumcision from Fox News.)

If I could offer any advice to Mr. Limbaugh, though, it would be to respectfully back the heck off. You don’t want to start a hip-hop beef with the kind of delicious, even lyrical fodder — the Oxycontin, hydrocodone and Viagra arrests — on your rap sheet.