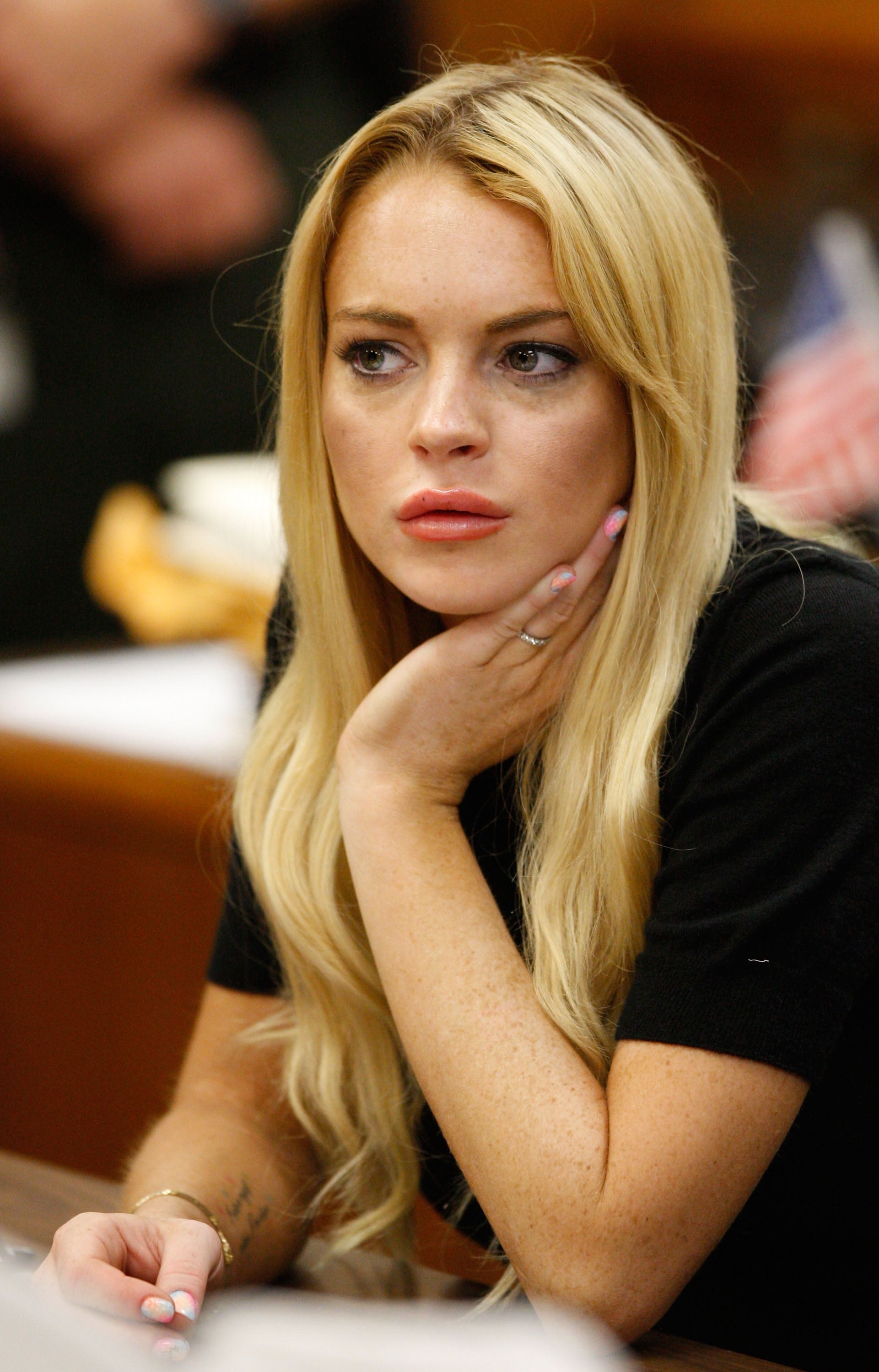 Lindsay Lohan is headed to the pokey.

A Los Angeles superior court judge on Tuesday ruled that the "mean girls" actress violated the terms of her probation stemming from a 2007 arrest for driving under the influence, and will serve 90 days — followed by another 90-day in-patient treatment program.

The reason: Lohan consistently blew off her court-ordered alcohol education classes, and will make up for it by serving three consecutive 30-day sentences.

How much of that time she will actually serve in jail is still up in the air. In general, due to overcrowding, women sent to jail for non-violent crimes only serve about 25 percent of their sentence, LA County Sherif spokesman Steve Whitmore said.

Lohan will serve her time behind bars at the Century Regional Detention Facility in Lynwood, Calif.

Under the terms of her sentence, two days after her release Lohan will have to report to a 90 day in-patient treatment program.

Additionally, until further notice by the court, Lohan will continue to submit to weekly random drug tests. Also, like now, the actress is not allowed to consume any alcohol until her probation is complete in August 2011.

She will surrender to authorities on July 20th at 8:30 AM, likely here in Beverly Hills. Lohan was sobbing loudly as her sentence was read.

In announcing her decision, Judge Marsha Revel said of the actress: "She comes and goes when she feels like it."

Fighting back tears, Lohan then addressed the court before sentencing.

"I wasn't expecting special treatment," Lohan told the court. "I have to provide for myself, I have to work. I did everything I was told to do … I'm not taking this as a joke, this is my life."

With Lohan sobbing in the background, her lawyer Shawn Chapman Holley, fully aware which way the wind was blowing at this point, pleaded to the judge: "At the end of the day, she has done far more than she hasn't done."

After sentencing outside the court, the actress' father Michael Lohan briefly told the press that the system had failed his daugter.

Lisa Bloom, Michael Lohan's attorney, told the press, "We have had one mission and that's to get Lindsay to rehab."

Bloom expressed her hope that the actress would go to a treatment center before her surrender to authorities.

You'd think things couldn't go from bad to worst for Lindsay Lohan — but they just might have. In clarifying a point made by defense lawyer Shawn Chapman Holley, Judge Marsha Revel let it slip out that she thinks Lohan has definitely violated the terms and conditions of her probation.

After a morning spent raising the stakes, the afternoon began in Beverly Hills courthouse with the Right On treatment program as much under a harsh spotlight as Lindsay Lohan herself.

After hearing from Right On co-founder Cheryl Marshall that the program did not see it as its responsibility to confirm whether Lohan's excuses or reasons for her absences were true or not, the Judge gave the treatment program a direct slap.

Judge Marsha Revel read out from a May 6, 2010 letter from Marshall herself stating that Lindsay "attends regularly and consistently." The letter, when added to the persistent absences, ill-defined sign-in records and general lax supervision of the judge's order, revealed Right On to either be too star struck or unable to handle the demands of treating a celeb like Lohan.

Almost laughably, Marshall once again stated that not only had the program interpreted the phone call from Judge Revel as not being a court order. She then added that, because of concerns about her privacy, Lindsay's 26 group sessions were in fact a group of one – her.

The group of one in question spoke up around 2:15PM.

Speaking for the first time to the court, Lohan, in a soft but staccato voice sought to clarify that she had actually attended Right On there times in last two weeks and not two time as as Marshall had stated.

The actress' comments, which were redundant, left the court more confused than she likely intended

As it stands right now, it looks like Lindsay Lohan will be in jail on July 15 or certainly by the end of this hearing.

Looking exhausted, with her hair pulled back, Lindsay was breathing deeply as if trying to compose herself. At one point for several minutes the actress held up a piece of paper to block cameras in the courtroom.

If you do the math, everything presented at Lindsay Lohan's ongoing probation hearing adds up to the actress going to jail.

At the end of Tuesday's hearing, Judge Marsha Revel will decide if Lohan, who had an alcohol monitoring SCRAM device clamped to her ankle after her last courtroom appearance on May 24, has been keeping off the booze, passing her weekly random drug tests and stayed in total compliance with her alcohol education program.

At the crux of the probation hearing is whether or not Lohan attended her alcohol education program every week since December 2009 to the present.

If Revel finds the actress has violated the conditions of her probation, Lohan could be spending a whole year in jail.

On the stand Tuesday, Right On co-founder Cheryl Marshall, who has administered Lohan's alcohol treatment program, admitted to Deputy D.A. Danette Meyers that the actress has missed nine sessions since December 15, 2009. Lohan did at least try to put a good face on it by attending a session on Monday, however.

The court made clear to the Right On program that the only reason Lohan could miss a session in the program is if she checked herself into an in-patient treatment program.

Put simply, if Lohan has not been in compliance, she's violated her probation — and that's grounds for time behind bars.

Earlier in the morning, while the lawyers were conferring, the black-suited and blonde-haired Lohan was giggling and laughing in the hall with her younger sister.

She was not laughing when Cheryl Marshall, co-owner of the Right On program, was called to the stand. Under questioning from Deputy D.A. Danette Meyers, Marshall recalled the Dec 15 2009 phone call outlining the verbal court order that Lohan was to attend sessions every week.

Lohan, Marshall noted, attended a session on December 16 and did not attend another one until December 30 — a span of more than a week. The judge was visibly annoyed by the almost immediate disregard by Right On and Lohan of her clear order — and in a series of sharp questions she made Marshall know it.

The Right On sessions are a combo of one-on-ones and group interviews. Lohan was expected to complete 26 interviews by the end of her program. That includes six and a half hours of one on one interviews and 24 15-minute sessions.

On paper, it reads like a revolving door of attendance and absences, with few make-up sessions. Of course, that fails to include a certain number of interviews and sessions that the actress had done at a previous program.

Deputy D.A. Danette  Meyers noted to the court her contention that as far back as May 1, 2009, Lohan has repeatedly been absent and not following the program. Meyers quoted an Aug 17, 2009 letter from Right On's John Marshall that talks about Lindsay's "endless" and "disrespectful" excuses and absences.

Describing the "chaos that follows" Lohan, Washington noted that the actress attended a February 23, 2010 group session but didn't return to the program until March 16 due to "a leave of absence." Such a pattern of a week missed here, a fortnight there seems indicative of Lohan's relationship with Right On.

One thing that could help the actress' case is that Judge Revel will not be considering the actress' SCRAM alert of June 7 as a part of the probation hearing.

As TheWrap reported previously, Lohan's alcohol monitoring ankle bracelet went off sometime around midnight while the actress was at a MTV Movie Awards party, registering a .03 alcohol level. As a condition of her bail the actress was previously ordered by the court to not only wear the bracelet and submit to weekly random drug tests, but to consume no alcohol whatsoever.

The next day, Lohan submitted to a test at her probation office which showed no evidence she had been drinking. Even though there is a more extensive test, which can gauge if an individual has been drinking any alcohol in the last 48 hours, that was not the test Lohan took on June 8.

The DA's office say that Lohan  had alcohol in her system and tried to tamper with her SCRAM ankle bracelet. Prosecutors contend they have witnesses and reports to prove that the reason her SCRAM alcohol monitoring bracelet went off after the MTV Movie Awards last month is because Lindsay consumed alcohol.

At the time, after her bail was raised to $200,000 and yet another arrest warrant ordered, Lohan was deemed not to have consumed booze based on a negative sample report submitted to the court.

The serious turn that the case took Tuesday must have come as a surprise to Lohan. The "Mean Girls" star spent the Fourth of July weekend with a smile on her face and a coffee in hand, in Malibu over the holiday and hanging with DJ Paul Oakenfold (pictured, left) might just be her last few days of freedom.

“This is a lot more perilous than Lindsay might realize,” a person close to the Lohan family told TheWrap. “The law and the judge’s patience have limits.”