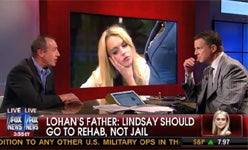 While discussing his daughter's performance in court — including her strategically-painted fingernail — Michael Lohan, Lindsay's estranged father, dropped an f-bomb of his own on Fox News Thursday afternoon.

During a tense interview with Shepard Smith on FNC's "Studio B," Lohan's slip came not while criticizing Lindsay ("Shep, it is stupid, it’s insane, it’s so dark") but while defending his conduct following her jail sentence.

“Someone called my name, and I was smiling. Big deal," Lohan said. "Listen, you can make anything you want out of it.