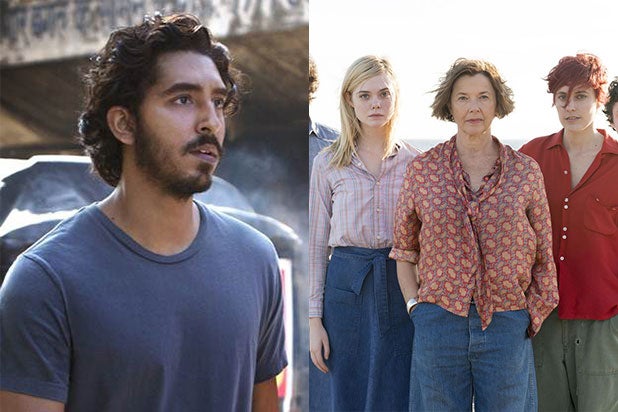 “Lion” and “20th Century Women” are strong holdovers at the independent box office ahead of this week’s Oscars nominations.

“Lion” earned $1.8 million this weekend, marking a $16.4 million total gross for the film starring Nicole Kidman and Dev Patel in its nine weeks at the box office. The film had a drop-off of just 20.9 percent, although the theater count of 575 remained the same.

“20th Century Women” expanded from 29 locations to 650 locations this weekend, accounting for an increase of 343 percent in weekend gross. Last week, the movie’s per-screen-average was $13,350, while this week, the comedy made $2,155 per theater. Over the three-day weekend, the film starring Annette Bening, Elle Fanning and Greta Gerwig earned an estimated $1.4 million, bringing its cumulative total up to $2.3 million.

This weekend’s newcomer, “The Resurrection of Gavin Stone,” came in under expectations with $1.4 million, although the film’s distributor, BH Tilt, had anticipated $3 million. The faith-based film stars Brett Dalton, Anjelah Johnson-Reyes, Shawn Michaels, D. B. Sweeney and Neil Flynn, and is directed by Dallas Jenkins.

This weekend also marked another indie newcomer — Sony Pictures Classics’ “The Red Turtle.” The animated film opened in three locations and grossed $21,811, meaning a per-screen-average of $7,270. The French dialogue-less film was directed by Michael Dudok de Wit and first debuted at Cannes Film Festival last May.

Also Read: '20th Century Women' Director on Filmmaking in Trump Era: 'I Have to Change My Game'

“Fences” played in 693 locations this weekend and grossed $1.3 million. During its six-week run at the domestic box office, the drama starring Denzel Washington and Viola Davis has earned $48.8 million.

Although Martin Scorsese’s “Silence” expanded to 833 locations after going wide last weekend (and becoming a box office bomb), it suffered a 42.1 percent drop-off and only earned $1.1 million this weekend. The religious drama starring Adam Driver and Andrew Garfield that cost an estimated $40 million to produce has only made $5.2 million domestically.

Awards contenders “Manchester by the Sea,” “Moonlight” and “Jackie” all dropped off between 40 percent and 50 percent this weekend. “Manchester” grossed $995,000 in its 10th run at the box office, while “Moonlight,” directed by Barry Jenkins, earned $633,744 in its 14th week. Natalie Portman’s “Jackie” made $365,000 in its eighth consecutive week.