In Ira Sachs‘ “Love Is Strange,” an elderly couple found themselves at the tragic mercy of the Manhattan real-estate market. The characters in his new movie, “Little Men,” are both victims and perpetrators of that same housing situation, although deciding which is which may be the subject of some heated post-film discussions.

In one corner is Brian (Greg Kinnear), an occasionally employed actor who inherits a Brooklyn building from his late father. In the other, Leonor (Paulina Garcia, “Gloria”), a Chilean single mother who runs a dress shop on the building’s first floor. Brian, whose therapist wife, Kathy (Jennifer Ehle), has been carrying their family for years, sees a chance for him to finally pull his financial weight. Leonor, who was closer to Brian’s late father than any of his children, has gone eight years without a rent increase or a long-term lease, and each resents and fears the possibility that might change. Who to side with? As Jean Renoir said, the terrible thing in this world is that everyone has their reasons.

As the grown-ups wage war, politely at first, less so later, their children become fast friends: Brian and Kathy’s son Jake (Theo Taplitz), a 13-year-old with dreams of being an artist, and Leonor’s Tony (Michael Barbieri), with his heart set on acting. As befits their aspirational professions, Jake is inward-looking and Theo outgoing, with a personality that pushes at the edges of the screen.

Sachs, who likes scenes that feel observational and offhand but gradually sharpen to a dramatic point, lingers on an acting class where Tony and his fellow students lob phrases back and forth, repeating and modifying them so the words gain meaning, lose it, and gain it back. Tony takes on his teacher, and it’s like watching a Wimbledon champion and a promising challenger rush to the net. 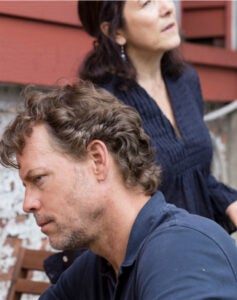 The boys settle into their own rhythm, discussing their mutual plans to applying to performing arts school — the same one, Tony notes, attended by Nicki Minaj and Al Pacino — but their parents can’t reach détente. Leonor keeps ducking attempts at sustained conversation, because she knows what’s coming: The neighborhood is gentrifying, and nearby storefronts go for more than four times what she’s paying in rent. Sachs doesn’t make her a simple victim: She’s prideful and vindictive, using Brian’s dead father to strike at his masculinity (he could be one of the “little men” of the title as well) but Brian’s passive aggression grates as well: He lets Leonor dodge the subject until the matter has gone too far to be peaceably resolved.

“Little Men’s” 85 minutes go by in a flash, but Sachs plays games with time, stretching out incidental moments and then leaping weeks or months ahead. For all its dramatic inevitabilities, you never quite know what’s coming next, and though the adults pretend to be prepared, they’re not much quicker on their feet than their teenage sons. They’re just more resigned to disappointment, more adept at rationalizing their own actions.

When Brian’s family moves from Manhattan to Brooklyn, a stack of Jake’s old drawings goes missing, and he’s upset at losing them. His dad hits him with a canned lecture about how it feels good to let go of things, and how he can always make more drawings, but Jake counters, “The new ones won’t be like the old ones.” You’d think the adults would feel the loss more keenly, but they’ve taught themselves to be numb, the way Brian repeats a string of endless “Thank you”s to guests at his father’s wake, only to break down in tears later as he’s cleaning up afterwards.

Like Ozu’s “Good Morning,” in which children similarly retaliate against their parents by giving them the silent treatment, “Little Men” is a deceptively slight movie which brings us towards the revelation that life is disappointment, and that happiness comes in being ready for it.