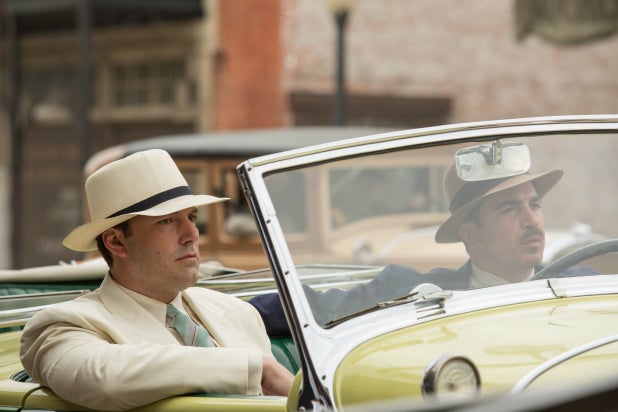 You can feel the makers of “Live by Night” working at cross-purposes: the writer has overburdened the movie with narration upon which the director relies too heavily, with an actor holding back so much that neither those voiceovers nor either of his on-screen romances ever register. That Ben Affleck is that actor, that writer, and that director doesn’t help a bit.

After the departure that was “Argo,” Affleck-the-director seems once again to be bucking to be the Beantown Scorsese. But while his Boston-based crime dramas “Gone Baby Gone” (like “Live by Night,” an adaptation of a Dennis Lehane novel) and “The Town” were lean and gritty, with no-nonsense thrills that called to mind the work of director Don Siegel, this more ambitious epic comes off as bloated and meandering.

The period detail is rich and worth watching, and there’s a deep bench of strong character actors to give the movie occasional jolts of life. Overall, however, the usually charismatic Affleck never manages to bring gangster Joe Coughlin to life. In that ever-present (and ever more irritating) narration, Joe informs us that after surviving the horrors of World War I, he would never again allow himself to follow orders. (In the first few minutes, it’s clear that Affleck doesn’t have that I’ve-seen-some-s— gravel in his voice he wants so badly to emulate from his movie-gangster forebears.)

See Video: Ben Affleck Gets in a Shootout With Cops in First 'Live by Night' Trailer

Despite the fact that Joe’s dad (Brendan Gleeson) is the superintendent of Boston’s police force, Joe runs with the Irish mob, until his relationship with the boss’ moll Emma Gould (Sienna Miller) gets him into hot water and sent to prison. Upon his release, Joe pledges allegiance to the rival Italians, who send him to Tampa, Florida, to oversee the vital influx of molasses used to make rum. (It’s the Prohibition era, after all.)

With sidekick Dion Bartolo (Chris Messina, dipping heavily into the bronzer), Joe manages to drive out the Irish hoods, and along the way he strikes up a relationship with Cuban heiress Graciela (Zoe Saldana). Playing a key role in Joe’s Florida adventures is police chief Figgis (Chris Cooper), who’s pragmatic enough to stay out of Joe’s way so long as he keeps the hubbub to a minimum.

But Figgis’ KKK-connected brother-in-law RD (Matthew Maher) threatens the peace when he starts attacking Joe’s clubs in an attempt to extort money from “the coloreds and the Catholics.” Then there’s Figgis’ daughter Loretta (Elle Fanning), who went to Hollywood to become a star and got turned into a junkie instead; Joe rescues her in the hopes of having leverage with the local law, but then she becomes an Aimee Semple McPherson-esque revival preacher, swaying the masses with her tales of sin and redemption. (Displaying the track marks on her arms never fails to wow the crowds.) When she starts preaching against gambling, that jeopardizes the Italian mob’s plans to build a huge casino in the state, putting Joe in a tense position.

Affleck has an onscreen rapport with young Fanning that’s sorely lacking in his encounters with both Miller and Saldana, and without a relationship to care about, the audience is left with 1920s mobsters jockeying for power. “Live by Night” brings little new to this well-trod ground, despite the best efforts of reliable co-stars like Cooper and the scene-stealing Maher.

Where the film succeeds most is in its recreations of Boston and Tampa during the Roaring Twenties; where that decade felt airless and artificial in “Fantastic Beasts and Where to Find Them,” the era comes to vivid, analog life here. Cinematographer Robert Richardson (a go-to cinematographer for both Scorsese and Tarantino) captures the distinct qualities of Massachusetts fog and Florida sunshine, giving pulsing life to nightclubs, cigar factories and seaside resorts. Nothing feels visibly green-screened or obviously digitally manipulated. (And unlike so many movies where the vintage autos are clearly being handled with kid gloves, here the cars give chase and get banged up.)

That visual sincerity is sorely lacking in the storytelling, which plays as muddled and halting. There are three separate references to Joe’s brother, a screenwriter in Hollywood, with almost no payoff; the IMDB page for “Live by Night” credits Scott Eastwood as having been cast as that brother, but he never appears in the film. In a tighter movie, such abrupt changes wouldn’t be worth mentioning, but as it is, the brother’s absence only raises the question of what else was left in the editing suite, and whether or not any of that footage might have helped this well-intentioned disappointment.