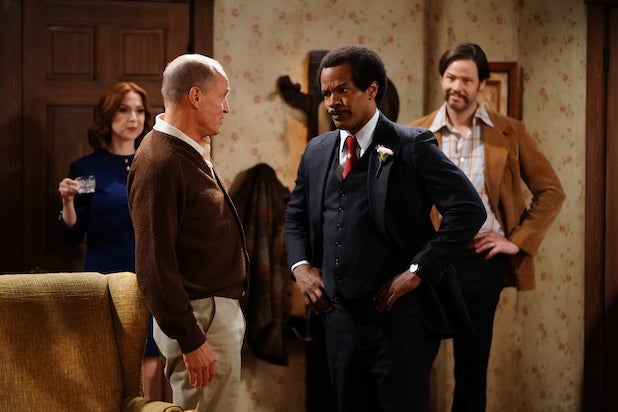 ABC execs are probably having quite pleased this morning, thanks to the ratings posted by Jimmy Kimmel and Norman Lear’s “Live in Front of a Studio Audience” special, which put the network in first place among the sought-after adults 18-49 demographic and total viewers during Wednesday’s primetime.

The 90-minute event re-created one episode each of Lear sitcoms “All in the Family” and “The Jeffersons,” featuring an all-star cast led by Woody Harrelson and Marisa Tomei starring as Archie and Edith Bunker, and Jamie Foxx and Wanda Sykes as George and Louise Jefferson. The special also included a surprise appearance from Marla Gibbs, who played Florence Johnston on the original “Jeffersons.”

From 8-9:30 p.m., “Live in Front of a Studio Audience” earned a 1.7 rating in the key 18-49 range and 10.4 million total viewers. With the special, ABC scored its most-watched September-to-May-season-closing Wednesday in 12 years.

Up against the Lear tribute, NBC settled for second place in the demo and in the overall-eyeballs tally, on the night all three of its “Chicago” procedurals aired their season finales.

ABC was first in ratings with a 1.3 rating/7 share in the advertiser-coveted adults 18-49 demographic and in total viewers with 7.8 million, according to preliminary data from Nielsen. Following the live Kimmel-Lear special (which got the above-mentioned rating and total viewers, plus a 9 share), the “All About ‘All in the Family’ and ‘The Jeffersons'” tribute at 9:30 p.m. earned a 1.4/7 and 7.9 million viewers. At 10, the “Whiskey Cavalier” series finale received a 0.7/4 and 3.8 million viewers.

Fox was fourth in ratings with a 0.6/3 and in viewers with 1.9 million. At 8, Part 2 of the “MasterChef Celebrity Family Showdown” settled for a 0.6/3 and 2.1 million viewers. It was followed by a repeat.

Univision and Telemundo tied for fifth in ratings, both with a 0.4/2. Telemundo was fifth in viewers with 1.3 million and Univision was sixth with 1.2 million.