The Lohan odyssey got even stranger on Wednesday night, when Lohan posted a photo on Twitter of herself with a gun aiming at her mouth. 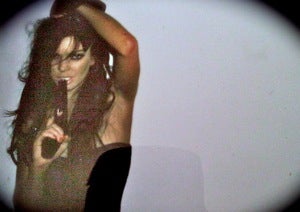 The photo was taken the night before by photographer Tyler Shields. It is for his upcoming book, "The Dirty Side of Glamor."

"She is a huge art lover and simply wanted to create some and that is exactly what we did!" the photographer said on his website.

Based on the last few weeks in her professional and personal life, Lindsay Lohan might respectfully disagree.

The 23-year old former rehab resident’s New Year's online vow that "2010 is about moving forward, not backward" has seemingly stumbled from potential comeback to – once again — crisis and controversy.

Over the weekend, David Michaels, the director of the indie comedy, “The Other Side,” fired Lohan, saying she was “not bankable.”

"The producers of the movie have reported that financiers have been resistant to finance the movie with Lindsay in the lead role," he told E! News.

Though there are conflicting reports about what her firing really entailed — her agency CAA told TheWrap that Lohan couldn’t have been fired because she wasn’t formally signed to the film, while Michaels insisted she was “on board” – at this point, it almost doesn’t matter. 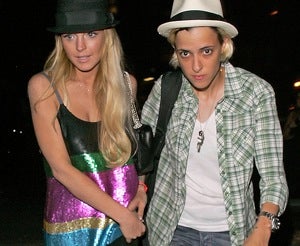 The fact is, Lohan is once more in the news for being considered problematic.

(Also read: The Ups and Downs of Lindsay Lohan — a Timeline)

In 2008, she was dropped after four episodes of what was to have been a six-episode “Ugly Betty” arc after reports of tension between her and star America Ferrara.

In 2007 the film “Poor Things” was canceled when Lohan left to go into rehab. Ironically, Brittany Murphy, who died suddenly last Dec. 20, was to have replaced her before the film was scrubbed completely.

That same year, she withdrew abruptly from “A Woman of No Importance” and had to be replaced in “The Edge of Love” reportedly for insurance reasons.

Lohan's reps did not respond to requests for comment. However, her prospects did garner reactions from other quarters.

"Her reputation is almost shot," one L.A.-based publicist who has worked with some of Hollywood's biggest stars told TheWrap. "She's been perceived as unreliable since making 'Georgia Rule' with Jane Fonda; she only seems to attract trouble now — and she no longer has the marquee value people are willing bank on."

During the making of "Georgia Rule," James G. Robinson, whose M 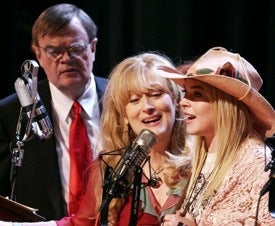 organ Creek produced the film, criticized her behavior in a letter, saying she had "acted like a spoiled child and in doing so have alienated many of your co-workers and endangered the quality" of 'Georgia Rule.'"

Besides a seemingly successful stint filming a short appearance in Robert Rodriguez's "Machete" in Austin last summer and her fashion line, Lohan seems to be striking out on many professional fronts.

Her BBC documentary about child labor and sex trafficking in India bombed in the U.K.

There has also been a revival of 'Bad Lindsay' in the tabloid press.

In the last month alone, there have been stories of money problems, a friend’s stolen $35,000 Rolex and skyrocketing debts, a combative relationship with ex-girlfriend Samantha Ronson (pictured above with Lohan) and too many late nights. Late last month, she was photographed falling over in her high heels outside a friend’s house.

It culminated last week with Twitter fan Lohan posting messages as the police entered her L.A. apartment at her father's request. In a stream of tweets, Lindsay wrote, "When will it ever end … it's been going on my whole life with him — hasn't he caused enough pain ?"

A locomotive in a family of potential train wrecks, Michael Lohan claimed he asked the authorities to get involved because he wanted to do a “welfare check” on his other daughter Ali, who had been living with Lindsay.

According to Lindsay’s mother Dina, her ex-husband is after her movie star daughter’s money for a child support hearing he has coming up in the next month. Dina announced she and her children would be seeking a restraining order against Michael.

On Tuesday, the senior Lohan's Twitter feed said the rail-thin actress was HIV positive and had underage sex with Tommy Mottola, Mariah Carey’s ex-hubby and Sony label head. Later in the day, he claimed he never made those assertions,  that his daughter didn't have HIV, that his account had been hacked.

Once compared to Jodie Foster by Roger Ebert, is Lohan taking her career down the fatal road paved by River Phoenix and Brittany Murphy?

From all accounts, Lohan brought a solid work ethic  to the filming of Rodriguez's “Machete.” And she has gotten some high praise from important supporters. “Lindsay Lohan is a fantastic actress," Meryl Streep said of her "A Prairie Home Companion" co-star in 2006.

"Lindsay was very professional onset, she had her game up for working with Robert De Niro and Robert Rodriquez," individuals close to “Machete” told TheWrap.

And casting director Matthew Lessall says of Lohan’s role on the 2009 ABC Family romantic comedy “Labor Pains”:  “I was very pleased with Lindsay's performance. I think the reason you did not hear much about her while she was filming was that everyone involved on the film respected her privacy and wanted her to be able to work to the best of her ability.”

Another casting director, who has worked with Lohan in the past, points out some other troubled stars who have  risen from similarly troubled circumstances: Robert Downey Jr. and Mickey Rourke.

Though, unlike Lohan, they both had constant work just before their recent comebacks, he still sees hope for the actress. “If producers and directors want to work with her and they think the role is a right fit, she'll still get the jobs."

“She's not dead, but she needs to get some foundation down so she’s going to learn how to survive the good, bad and the ugly of life and Hollywood,” Jennifer Gimenez of VH1’s “Sober House” told TheWrap.

ALSO READ: "Celeb Deaths: The Whole World Watches, but No One Helps."