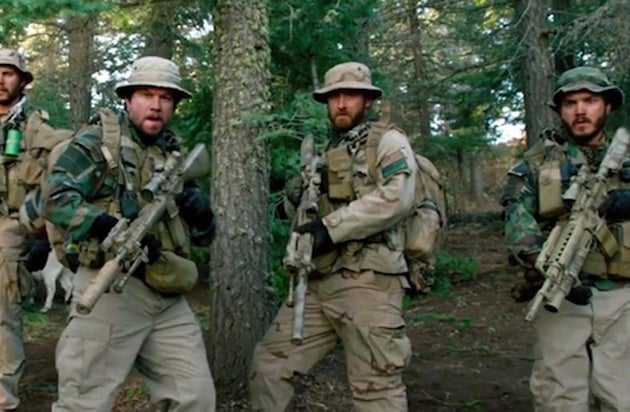 Universal Pictures unveiled writer-director Peter Berg’s gripping war drama “Lone Survivor” Wednesday night in North Hollywood and not only does the studio have something special on its hands, it seems to know it, too.

How else to explain Ron Meyer’s attendance? The vice chairman of NBCUniversal introduced Berg, stars Mark Wahlberg and Taylor Kitsch and the real star of the evening, former Navy SEAL Marcus Luttrell, the American hero who wrote the book on which the movie is based and more important, survived the harrowing events it depicts.

Luttrell received a hero’s welcome and a standing ovation following the rousing screening, which ended mere minutes after Wahlberg’s beloved Boston Red Sox won the World Series. The timing was fitting, given how Luttrell repeatedly referred to his fallen comrades as his “teammates.”

“The only people who know exactly what you are and what you’re capable of is the guy who’s to the right and the left of you,” Luttrell told the crowd. “Wives will say, ‘You don’t know my husband like I did.’ But in the back of my head I’m thinking, I know you’re husband better than you. I know everything about him. I know what he smells like after day one as opposed to day two without a shower. I know how he moves in the dark.

Luttrell didn’t leave behind a shred of intensity on the battlefield. He’s a real-deal Navy SEAL in person, towering at 6’6” over Wahlberg, who shines in the second half of the film when he’s forced to carry the film on his back.

“There isn’t anything I’ve felt more compelled to get done than this movie,” said Wahlberg, who humbly deflected moderator Tina Brown’s praise for training with actual SEALS before shooting the film. “It was hard making the movie with Marcus there, but I was determined to try to make him as proud as I possibly could no matter how tired I was or beat up we got. We always had the luxury of going back to our hotel at the end of the night and those guys never go back.”

Berg credited Aubrey for insisting he read Luttrell’s book during a break from filming on the action movie “Hancock” in 2007, when Berg’s war movie “The Kingdom” was in post-production. After getting a meeting with Luttrell, Berg offered to show him some scenes from “The Kingdom,” and its legacy may very well be that it earned Berg the job of directing “Lone Survivor.”

“He caught me with his attention to detail,” Luttrell said, “and how he portrayed the enemy in the film.”

The former SEAL, whose military career ended due to injuries, said he warned the Berg to treat the story with respect, telling him that he screwed it up, “you gotta worry about the other 1200 to 1500 Navy SEALs who will come knocking at your door in the middle of the night and snatch you out of your bed.”

Berg confirmed the warning, adding that they went to a bar and “had about 500 beers and he told me then that he was going to give it to me and I just better not fuck it up.”

The dramatic arc of “Lone Survivor” is constructed around a complex moral dilemma: Should the SEALs kill the innocent Afghani goat herders who threaten their military op or retreat and abort their mission?

Wahlberg told the crowd that he and co-star Ben Foster “had endless debates” over drinks at the hotel bar about it, while Berg said the dilemma motivated him to make the movie.

With a service dog sound asleep on the stage in front of him, Luttrell described how he survived in a remote Afghanistan village while he waited to be rescued after his comrades were killed. While the movie features a prolonged gunfight across some incredibly rocky terrain, it does take certain liberties due to time constraints. The film unfolds over three days, but Luttrell says the real ordeal actually lasted five days.

“Like ‘The Fighter,’ it’s difficult subject matter to get especially women to see. Anything that has to do with war or fighting is usually a huge turn-off. But it’s our job to bring the story to as many people as possible,” said Wahlberg of the challenge facing the male-skewing movie.

Luttrell isn’t concerned with the movie’s box office performance, as he’s focused on The Lone Survivor Foundation, a charitable organization that supports returning veterans and raise money for the Afghanistan village that provided him food, water, shelter and safety. He has also kept in touch with an Afghani man named Gulab who risked his own life to save him.

“Lone Survivor” will premiere at AFI Fest on Nov. 12, after which the thought-provoking tearjerker will likely be considered an awards contender, especially seeing how different it is from the rest of the field.

As for Ron Meyer, the highlight of the night may have been when an older woman in the crowd stood up and explained how she normally doesn’t see “war pictures,” but braved Burbank traffic to see “Lone Survivor” because Meyer made the movie. Luttrell turned to Kitsch and quietly asked who Meyer was. Kitsch smiled discreetly and helped him out.

After all, what are teammates for?