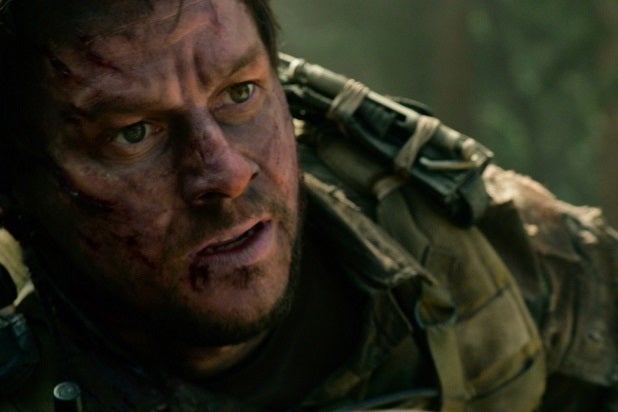 “Lone Survivor,” the Afghanistan War drama starring Mark Wahlberg, is primed to knock Disney’s animated juggernaut “Frozen” out of the top spot and win the box office this weekend.

The tale of the failed 2005 Navy SEALS mission to capture a Taliban leader is likely to land in the high-teen millions and could hit $20 million, say the analysts. In any case, it should easily outpace the weekend’s other wide opener, Summit Entertainment’s sword-and-sandals saga “The Legend of Hercules,” and a handful of expanding awards hopefuls.

The Weinstein Company is broadening “August: Osage County” from five to roughly 900 theaters, Warner Bros. is increasing the screen count on Spike Jonze’s computer love story “Her” from 47 theaters to around 1,700 and CBS Films will have “Inside Llewyn Davis” in roughly 500 theaters, up from 161 locations.

“Lone Survivor” was adapted and directed by Peter Berg and is based on the book of the same name by Marcus Luttrell and Patrick Robinson. Taylor Kitsch, Eric Bana, Emile Hirsch and Ben Foster co-star in the R-rated action drama, which will be in roughly 2,650 U.S. theaters.

The last time director Berg, Kitsch and Universal went into box-office battle together was in summer 2012, with the pricey aliens-at-sea saga “Battleship.” That one was a hit overseas but ran aground at the U.S. box office. The stakes aren’t as high on “Lone Survivor,” which cost less than a quarter of the $200 million-plus that “Battleship” did, and its prospects look good.

Universal has given “Lone Survivor” Oscar qualifying runs on single theaters in New York and Los Angeles the past two weekends and it has played strongly, averaging more than $43,000 per screen. The reviews have been good (71 percent on Rotten Tomatoes) and the social media signs are solid.

On Thursday morning, sales for “Lone Survivor” at online ticket broker Fandango were outpacing those for last year’s “Zero Dark Thirty” at a similar stage, and that one took in $24 million in its wide opening on this weekend last year.

Males are the target audience for “Lone Survivor,’ and the tale of patriotism and courage should resonate in the Heartland. It’s been getting plenty of attention from the news networks with Luttrell, whose story is the basis of the movie, front and center in the feature segments.

Akiva Goldsman, Sarah Aubrey, Randall Emmett are among the producers on “Lone Survivor,” along with Berg and Wahlberg.

The PG-13-rated “The Legend of Hercules” is directed by Renny Harlin and stars “Twilight” alum Kellan Lutz. The script, from Sean Hood and Daniel Giat, focuses on how the half-man, half-god son of Zeus gained his powers and became a hero.

Distributor Summit will have the 3D action adventure tale in 2,,104 theaters. It was produced and mainly financed by Millennium Films, which puts the production budget at $40 million. Projections are for an opening of $10 million or less, under what you want to see for a movie with that budget.

Also read: ‘Hercules’ vs. ‘Hercules': 6 Box-Office Battles Between Movies That Were Awfully Alike

It is the first of two movies about the ancient hero set for this year. Paramount and MGM’s “Hercules: The Thracian Wars,” directed by Brett Ratner and starring Dwayne Johnson, will hit theaters in July.

It hasn’t been screened for critics, so there aren’t any reviews, and social media isn’t encouraging. It’s pacing ahead of “Conan the Barbarian” on Facebook, but isn’t matching the Twitter count of that film, which opened to $10 million and topped out at a disappointing $48 million worldwide in 2011.

The expanding Oscar hopefuls probably aren’t on enough screens to rank among the weekend’s leaders, especially since “The Wolf of Wall Street” — which topped the box office on Tuesday — “American Hustle” and “Saving Mr. Banks” have all been playing solidly.

“August: Osage County” is tracking at around $10 million and “Her” is at $8 million, but their per-screen averages may be a better indicator of how well they’re connecting.

With the star-power of Meryl Streep and Julia Roberts and John Wells directing, “August” probably has the best chance to take off. The dark comedy about a dysfunctional Oklahoma family, adapted by Tracy Letts from his Pulitzer Prize winning play, has averaged $35,000 and nearly $28,000 in two weeks on five screens.

But social media is middling, and the critics haven’t been overly impressed; it’s at 64 percent positive on Rotten Tomatoes.

It is produced by George Clooney, Jean Doumanian, Grant Heslov, Steve Traxler and Bob and Harvey Weinstein, and has a $20 million production budget.

Also read: Can ‘Inside Llewyn Davis’ Find Another Gear at the Box Office?

The sci-fi romance “Her” is one of the better-reviewed movies of the year, with a 91 percent positive rating on Rotten Tomatoes. But whether that critical appeal – it shared the L.A. Film Critics’ best picture honors with “Gravity” — will translate to mainstream success is a different question, owing mainly to the film’s offbeat plot.

Joaquin Phoenix stars as a lonely writer who develops an unlikely relationship with his newly purchased operating system that’s designed to meet his every need. Scarlett Johanson provides the voice, and does it so well that some have seen her ineligibility in the Golden Globes supporting actress race as an injustice.

Amy Adams, Chris Pratt, Olivia Wilde and Rooney Mara co-star in the film, which Jonze wrote and directed. He also produced, along with Megan Ellison.

Last week’s runner-up movie, “Paranormal Activity: The Marked Ones,” is expected to take a big dive, but Warner Bros.’ blockbuster “The Hobbit: The Desolation of Smaug” is likely to be among the leaders.