There is absolutely nothing like being in love with a TV show that no one else you know is watching to make you realize the importance of community to the modern state of television.

I’m talking on a level beyond fancy Facebook campaigns and on-screen Twitter commentaries — I’m talking about the state of knowing that you are the only person to care about something, even something as silly as a TV show. 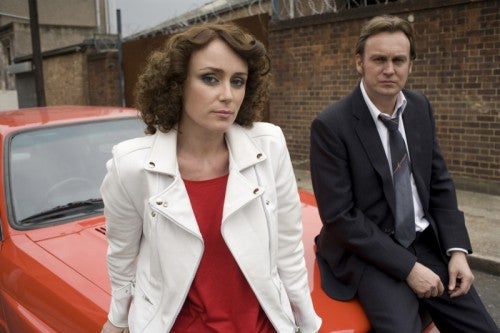 The currently running BBC series "Ashes to Ashes" is a spinoff of the better known "Life on Mars," a clever cop drama about a modern-day police officer who is inexplicably sent back in time to the 1970s and forced to solve crimes. The show combined surrealist touches with the long-established crime-of-the-week format — and threw in some sweet ’70s fashion and music for fun.

"Ashes to Ashes," which probably will never see American adaptation like its parent show (Side note: Have you heard what the twist ending of the American "Life on Mars" is? Because if you didn’t, look it up — it’s crazy!) takes "Life on Mars" and adds a modern female detective sent back to the 1980s who is conscious of her circumstances but still trapped by them, and also attracted to the brutish yet irresistible Gene Hunt (Philip Glenister).

These two factors give the show some pleasing self-awareness as well as a touch of "Castle"-esque sexual tension. That, plus the inherent cheesiness of the 1980s, make "Ashes to Ashes" an improvement on "LIfe on Mars" (while of course owing it a huge debt).

No one I know cares, of course. I have to watch "Lost" the night it airs for fear of spoilers, I enjoy hours of discussion about "Project Runway" and "Mad Men" with every new episode, but when it comes to one of the most creative and interesting cop dramas of the last decade, I am entirely on my own.

I’m willing to chalk this up mostly to the fact that the show, beyond an underpublicized BBC America run, has never found any traction on our shores — and thus it’s not like people should know about it.

I don’t typically blog about my personal TV viewing habits, in part because it might mean admitting that I do not get all of my media from strictly legal sources. But I am currently watching the third season now and I am lonely.

Sure, I have friends who are interested in watching it (usually after hearing me rant on this topic), but at this point, to properly understand the show they’d not only have to watch the previous two seasons of "Ashes to Ashes," but also "Life on Mars." That’s 32 hours of television — each season lasting eight episodes — and thus too much to expect at this stage. The result is that I am watching this show entirely in a vacuum.

Think about it: That doesn’t really happen anymore. With technology’s increasing entwinement with TV, the act of watching a show is more and more a social experience. We vote on our favorite "Idol" contestants. We Twitter about the newest "24." We squee over "Glee." And we do so knowing that there is a multitude — friends and strangers alike — who are sharing a similar experience with us.

I hit this wall in high school, when I found the paranormal adventures of Mulder and Scully to be a soothing balm for adolescence. Then I turned to the Internet to find others who felt similarly to me. That experience proved to be infinitely helpful for my future career as a Internet journalist, as fighting on message boards with people over trivial "X-Files" issues was excellent training for dealing with comment trolls.

But at this point with "Ashes to Ashes," I feel too old to seek out new fan communities. In part that’s because I’m overwhelmed as it is by the social networks I’m already a part of, and in part it’s because I’m not looking to engage with hardcore devotees; I’m simply interested in casually discussing the latest developments with others, in the fashion to which I am accustomed.

Alas, much like "Ashes’" Detective Inspector Alex Drake, I am a modern girl trapped in an archaic system, one where I’ve gotten no hints about upcoming plot developments, one where the only opinions I have about a show are mine alone.

OK, put like that, maybe it’s not so bad. That’s actually the thing to confront about this experience: That as fun as all the social components surrounding a show might be, maybe there is value to the experience of just simply enjoying a program on an entirely individual level.

But that won’t stop me from saying this: If you also are an "Ashes to Ashes" fan, if you also want to squeal with someone over the Quattro or Alex Drake’s white leather jacket, drop me a line — because I’d love to talk about it.