Variety reports that Spirit Pictures is looking to revive King Kong, having acquired the rights to “Kong: King of Skull Island," the big-ape book by Joe DeVito and Brad Strickland that was published in 2004.

Given that even Peter Jackson’s glittering, CGI-fuelled 2005 version of the story wasn’t a patch on the 1933 original, there’s reason to sniff at news of a prequel/sequel that explores the origins of Skull Island’s big gorillas, its dinosaurs and natives.

Gives you pause for thought about whether Kong projects are cursed — and, yes, that is Linda Hamilton.

But, on the plus side for “Kong: King of Skull Island," the family of Merian C. Cooper, co-director of the original, who own the Kong rights, have given their blessing to the book and the film project.

And the synopsis, found at the official site, sounds the stuff of old-fashioned action-adventure.

The tale starts in 1957 with son Vincent Denham’s investigation into what became of his adventurer dad Carl — and Kong’s body — leading to Skull Island, where he encounters an exotic storyteller who drugs him up and flashes him back a century to the ascendancy of Kong and the origin of that big wall.

Testimonials on the site, from the likes of Ray Bradbury and uber-collector Bob Burns, and customer reviews on Amazon, are all positive.

DeVito’s artwork is vivid, too. 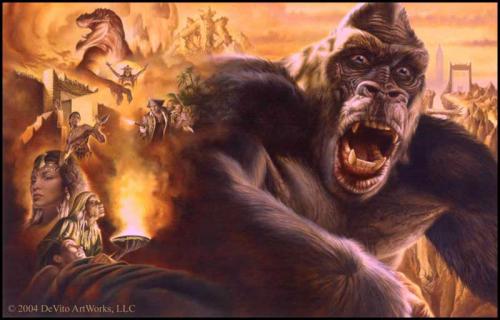 "We’re very concerned with honoring Merian C. Cooper’s legacy in Hollywood,” Spirit’s Steve Iles told Variety. “We want to make sure that whatever we deliver will honor his memory.”

Fair enough, and best of luck.

But it’s Spirit’s other “Lost World” style project “War Eagles” — based on a concept developed by Cooper and Ray Harryhausen before the outbreak of WWII — that sounds much more interesting.

Turned into a novel by American anime pioneer Carl Mackek and published last year by Angel Gate, “War Eagles” has one of the trippiest — not to mention most expensive-sounding — synopses I’ve encountered: 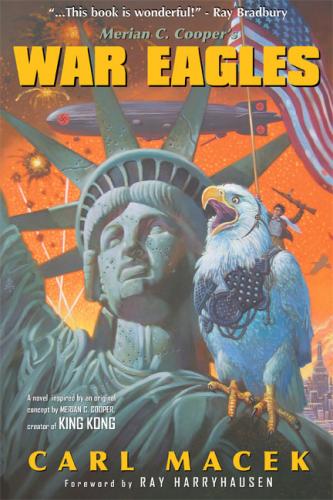 “Just prior to the start of WWII, a publicly humiliated Army Air Corps test pilot, court-martialed and discharged from the service for an unauthorized flight that ultimately endangered the life of President Roosevelt, takes the only job he can get — flying an experimental airplane around the world from pole to pole.

"When his plane is unexpectedly attacked and crashes on an uncharted island above the Arctic Circle, the pilot discovers a strange land inhabited by a lost tribe of Norsemen who ride giant eagles and, in a surprising turn of events, becomes America’s only hope against a devastating sneak attack by the Nazis and their powerful new electromagnetic weapon.”

Flying Eagles vs the Luftwaffe?

Now to convince Michael Bay to direct this rather than “Transformers 3.”