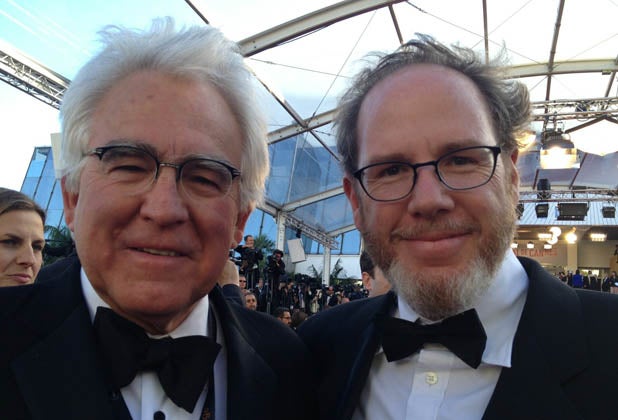 Just after 10 a.m. on Dec. 4, the National Board of Review named Alexander Payne’s “Nebraska” one of the year’s 10 best movies and its stars Bruce Dern and Will Forte the best actor and supporting actor of 2013. About two hours later, the Sundance Film Festival announced that Jeff Preiss’ “Low Down” had landed a coveted slot in the festival’s prestigious U.S. Dramatic Competition. Both were cause for celebration at the modest office of Bona Fide Productions in West Hollywood, where producers Albert Berger and Ron Yerxa had fought for a decade to put each on the screen.

“We’re a little discombobulated with emails today,” said Yerxa of the red-letter day for his and Berger’s 23-year partnership, which goes back to Steven Soderbergh’s “King of the Hill” and Payne’s “Election.” Bona Fide also has produced an array of smart and impressive films that includes “Little Miss Sunshine,” “Little Children,” “Cold Mountain” and “Ruby Sparks,” along with the upcoming HBO series “The Leftovers.”

But while they wait for the Sundance premiere of “Low Down,” which stars John Hawkes and Elle Fanning and is set in the L.A. jazz scene of the 1970s, all eyes are on “Nebraska.” The understated, sharp but affectionate black-and-white road movie goes back a full decade, to when a friend gave Berger and Yerxa a spec script by Seattle-based TV writer and performer Bob Nelson.

“It was very life-affirming, positive, full of heart, but also edge,” Yerxa told TheWrap. “It didn’t wear its heart on its sleeve — it wore it more in the subtext.”

They came up with budgets that projected the film to cost a couple million dollars, put out feelers to low-budget directors and, almost as an afterthought, sent it to Nebraska native Payne to ask if there were any regional filmmakers he’d recommend. Until that point, Payne had only directed his own scripts.

Added Berger: “The dilemma was that he was just starting ‘Sideways’ at the time, and he had made ‘About Schmidt’ before that. And he said, ‘I don’t want to make three road-trip movies in a row. Will you wait for me to make another film first?’ We agreed, but we didn’t realize it would take seven years for him to make ‘Sideways’ and then find and make ‘The Descendants.'”

While they waited for Payne, who revised, pared down and strengthened Nelson’s script, Berger (right) and Yerxa (below left) sold the film to Paramount’s specialty house, Paramount Classics. When that company folded, “Nebraska” went to the parent company’s new imprint, Paramount Vantage; when Vantage was shuttered, it shifted to Paramount itself. And while Classics and Vantage had been OK with Payne’s plans to shoot the film in black and white (as well as his requirements of final cut and a free hand in casting), it turned out that the parent company’s offer to fund the film for about $17 million hinged on the director backing off on the one key point.

“They were somewhat shocked or chagrined when Alexander reiterated at the greenlight meeting that he definitely wanted to make it in black and white,” said Yerxa. “They said, ‘Well, that doesn’t work for our international deals or our TV deals.’ So for a while they came back with an extremely austere budget that they said would work for them on the black and white. And from there it was just pulling back and forth on the tug of war until we got to a makeable budget.”

Berger said the initial black-and-white budget was less than $5 million, but that they eventually compromised at about $13 million. It helped that as negotiations were under way, Payne’s “The Descendants” opened to rave reviews and good business. The new budget was just enough for a shoot that Payne insisted had to take place in Montana, Wyoming, South Dakota and Nebraska, four states that didn’t offer production rebates. “It took away any pads, obviously,” said Berger. “And it took away everybody’s fees, pretty much, so everybody was working for scale.”

The tricky part, he added, is that Payne had spent a year carefully choosing locations that worked visually more than logistically — so a street might be made up of a grocery store from one town, a bar from another town an hour away and a house from a third town 45 minutes in a different direction. “The challenge was dealing with an hour here, an hour there and still staying on schedule,” Berger said. “But we ultimately finished on time and under budget.” At one point, when they fell behind by about a day and a half and were trying to figure out how to make up the time, both Dern and Forte independently offered to come in early or to waive the mandated turnaround time between shoots.

A second twist came last spring, when about 12 weeks into a post-production process that for Payne usually lasts 36 weeks, the filmmakers showed a cut to Paramount. Payne and editor Kevin Tent had been working hard to find the right balance of comedy and drama, and to make the slow- paced film flow — and the studio loved the result. “We thought, well, there’s still a week before the Cannes deadline,” said Berger. “Maybe we should take a shot at this.” Cannes accepted the film into competition. “And then it was, ‘Holy shit, we gotta wind this up.'”

Also read: Why ‘Nebraska’ Reminds June Squibb of Her Mother

The first Cannes screening, Yerxa added, initially felt like a disaster. “It seemed to be playing flat at the Palais,” he said. “Albert and I were looking at each other thinking, maybe this film doesn’t work. There was no reaction until the very end when the first title came on, and then there was yelling and hooting and this super-long standing ovation. We really weren’t prepared for it.”

But then, the two had the same experience during the first Sundance screening of “Little Miss Sunshine.”

“People didn’t laugh at that for the longest time,” said Yerxa. “It wasn’t until late in the movie, when they jump on the bus, that the audience seemed to realize that it was a comedy. Before then, they were taking it as some kind of family drama.”

“Little Miss Sunshine” went on to win the festival’s top prize and become an Oscar Best Picture nominee. But there was a dark side to the success of “LMS,” too, because the it ran afoul of Academy rules that mandated that no more than three producers could receive Oscar Best Picture nominations for a film. Even though a Producers Guild arbitration panel ruled that five producers deserved credit, AMPAS rules were inflexible — and as a team, Berger and Yerxa were the easiest two to eliminate.

“That was a painful experience, but I think everybody in our group and even at the Academy knew that it didn’t make sense,” said Berger. Largely because of what the AMPAS Producers Branch knew was an injustice, Oscar rules were subsequently changed to allow for more than three producers in exceptional circumstances — and in virtually all cases, the Academy now takes the word of the PGA about who deserves a nomination.

“That part of it was gratifying,” said Yerxa with a small grin. “But it is nice that we’re the only two producers on ‘Nebraska.'”