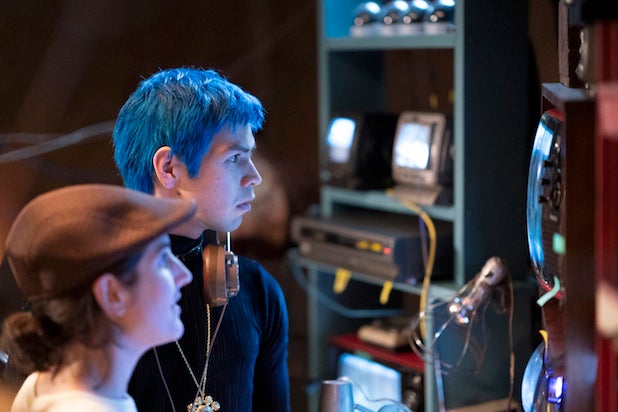 In the season premiere of the HBO comedy “Los Espookys,” the host of a Latin America news show tells her viewers that there’s been an angel calling a restaurant over and over — and, gasp, not picking up their order. “Los Espookys” co-creator Julio Torres told TheWrap that the host, even though overtly sensational, is actually based on a little kernel of truth.

“My relationship with Latin American television was catching glimpses of the news and morning shows,” Torres said. “Stories of chupacabras and [singer] Gloria Trevi scandals I feel like were monopolized on those shows.”

Torres grew up in El Salvador before moving to the United States 10 years ago, and is now a writer on “Saturday Night Live.” Growing up, he said that the local news, at times, would veer into stories of the paranormal and celebrity scandals. This concept would be the inspiration for Gregoria Santos #8, the eighth victim hypnotized by overlord producers to host “Mira Esto.”

“I remember as a kid being really scared because a show claimed that they had discovered the gates to hell,” Torres said. “They reported it like the news.”

Torres is one of three co-creators (Ana Fabrega and Fred Armisen) behind “Los Espookys,” a primarily Spanish-language comedy where four horror fanatics make a business out of creating DIY haunts for clients. Torres and Fabrega star in the show alongside Cassandra Ciangherotti, Bernardo Velasco and Armisen.

Torres and Fabrega said that they were enamored with adding a newscaster-type to their show early in the writing process, specifically in the spirit of those seen on Univision’s “Primer Impacto” or El Salvador’s “Noticias 4 Vision.”

The duo initially thought about having the character be a normal person who grows cynical of the stories she was forced to read on screen. They ultimately decided to make who she was and her motives a mystery, adding her to the strangeness of the “Los Espookys” world.  When the cameras are rolling, Santos is hypnotized and in control by her overbearing producer on the show. When the cameras are off, Santos is shocked and confused by where she is and what she’s doing.

What stands out about on-camera Santos is her ability to sell to the audience that the stories she’s telling are serious. Santos delivers the day’s topics with unflinching eyes, even when talking about a kid who has been saved by the same dog five different times.

Torres can recall a time when a Spanish news segment tried too hard to be as serious as possible.

“They would do a lot of stories of people getting possessed and people speaking in tongues. They would go to these small little rural towns,” Torres said. “In one of these towns, they did a profile of this woman who was sick for years.”

Torres said he had a cousin who dated a scuba diving instructor who was hired by the same network to go down a well. The diver obliged. What he found at the bottom was a doll with nails in it. The news anchor on the story of the sick women would then pass the discovery off as the reason why the woman was sick.

“Of course the reason she was sick was at the bottom of a well,” Torres said.