Most people who are single and looking for love would agree that dating is hard, and by hard I mean a total nightmare. Finding ways to meet people isn’t much easier, especially in a city like Los Angeles. For a select, bold group, the quest for love — and possibly fame — brings them to ABC’s hit dating experiment, “The Bachelor.”

Series creator Mike Fleiss invited me to the set as season 14 started shooting (the first episode premieres Monday, Jan. 4). The next bachelor, Jake Pavelka, a fan favorite from season five of “The Bachelorette,” is charming and handsome.

I had a blast looking around the house and meeting some of the ladies. I picked out my top three favorites and met a couple of girls who will be total and complete train wrecks. I think a couple of these chicks meant to audition for "Jersey Shore" and took a wrong turn. It promises to be a great season and I, for one, can’t wait.

But what I discovered during my visit is that the sexiest part of “The Bachelor” is host Chris Harrison. 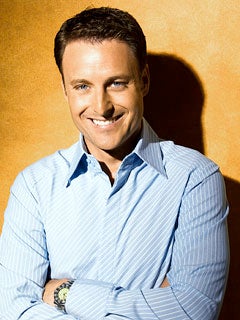 Harrison, 38, has been married for 16 years to his college sweetheart, Gwen, and the couple has two children, a son and a daughter. There is nothing more attractive than a man who loves his wife and believes in his fairytale match so much that he wants others to experience what he has.

Hosting shows like “The Bachelor” and “The Bachelorette” could easily leave someone jaded or perhaps contribute to a wandering eye, but Harrison says it has had the opposite effect — making him a better man and husband. He told me that hosting the programs since 2001 has taught him to be grateful for his wife and children, since contestants are presumably on the shows looking for the same life he already enjoys.

But he cautions that contestants who go on the show to find fame ultimately fail. Harrison draws a comparison to those who go online with the aim of serial dating. Ultimately, he says, they will only attract other serial daters. “When you are sincere in what you are looking for, you will attract sincerity,” he said.
Harrison wouldn’t hesitate to let his own brother appear on “The Bachelor,” because he says it’s no different from an online dating service or a bar. The chances of finding love in those situations are a crapshoot, he says, and one could argue that statistically you are more likely to find love on “The Bachelor.”
When asked what advice he would give to people looking for love, his answer was simple: Have guts. His most recent example was when his 8-year-old son received a note from a girl at his school, which said she had a crush on him. Harrison spoke to his son about how much courage it took for the girl to express her feelings, and he advised him to tell her “thank you.”
Regardless of how old you are, the advice remains the same: Be bold, brave and kind, because love will not find you; you need to go out and find it. And if you put yourself out there, you increase your chances. Fear will stop you, and regret will crush you.
As I left the “Bachelor” set, it was clear that Jake will be a fabulous bachelor, women across the country will undoubtedly fall in love with him and we will hold our collective breath as he holds the final rose.
In the end the lucky woman won’t be a contestant on the show. It will be Gwen, Harrison’s wife, because she already has what so many of us want — a man who believes in fairytale endings.
BIO Ilana Angel
Ilana Angel is a freelance writer living in Los Angeles. She is author of the "Keeping the Faith" singles blog for the Los Angeles Jewish Journal. You can follow her at www.Twitter.com/ilanaangel.